When Jamila Robinson retires, she knows exactly what she wants to do — open a bed and breakfast, ideally in the south of France, a place where she can welcome visitors and treat them to her culinary skills (she’s especially proud of her pie and tart making).

“Somewhere beautiful with a sunny garden,” she tells me with a smile. But she quickly adds that she’s only 45, and doesn’t plan to retire for at least a decade.

Until then, she’s happy to indulge her love of food and cooking at home and through her work as a regional features content strategist with the Gannett media company, specializing in coverage of dining, arts and culture. It’s a professional role that keeps her calendar packed; at dinner she tells me about trips planned to New York and Chicago in the coming days for galas and award shows for food writing, in-between her daily work for Gannett’s USA Today network based out of Washington, DC.

I figure deferring to the someone so intimately involved in the city’s restaurant scene is the right move for planning this dinner interview. So at Jamila’s suggestion, we’re eating in the H Street corridor, a neighborhood that’s seen year-on-year growth in its restaurant scene. Our venue is Bar Elena, a bright and inviting space. Colorful artwork lines the exposed red brick walls (we’re sitting below a painting of two pairs of legs). Retro pinball machines take up residence in the back, and I have to resist the urge to get up from the table to play the Indiana Jones game. 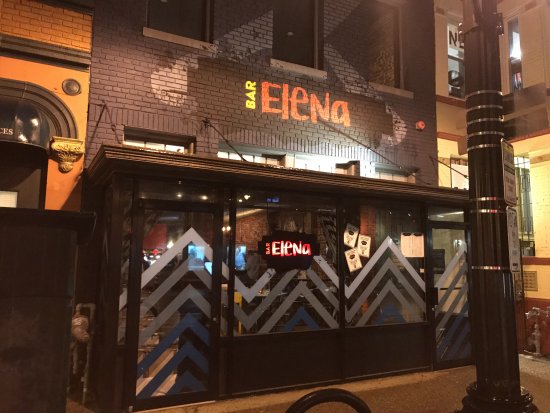 Two thumbs up for the staff as well, from the affable hostess to our waiter who can speak in depth about the menu without it sounding like a rehearsed list of facts.

It’s a relaxing atmosphere and helps the early conversation with Jamila flow, although given her warm and easygoing nature a stilted chat with her is practically impossible. She’s quick to joke and laugh, and inquisitive, asking almost as many questions of me.

We chat about our experiences working in the media. She works on corporate content strategy, coordinating the various teams at Gannett across their 109 markets including USA Today and state-specific networks.

For example, Jamila worked on a project with Gannett’s seven NJ Today news markets in New jersey to curate content for an application to help people plan their weekend activities. Instead of a haphazard mix of websites across the various markets, the app consolidated all the information in one place — so if the weather is looking good on a given day, the app might send a push notification to the user saying the beaches will be nice, check out NJ Today‘s beach guide, or browse a list of 10 restaurants that will deliver on the waterfront. “I was looking for ways to pull in our most well-received content and help people plan their days,” she says.

But when others ask about her work, “I tell them I send emails and go to meetings,” she jokes. 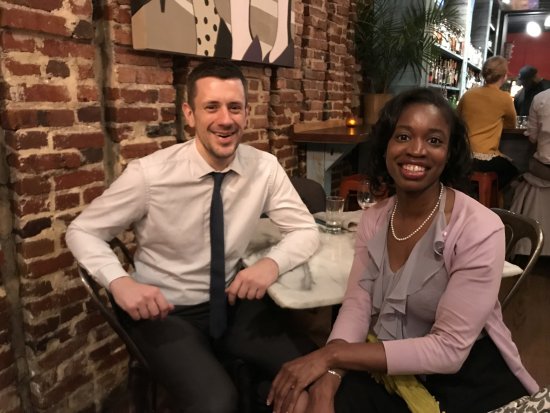 Success or failure of one of her content strategies is easy to measure through metrics like how many people are visiting Gannett’s sites, how many downloads their apps get, whether people are responding to push notifications, what kind of feedback they’re getting and more. “I’m very results driven,” she tells me, “And I like to make sure I’m moving the needle towards mobile.”

Rapidly evolving mobile phone technology means that Jamila always has her eyes on the future, and how Gannett can use developments in audio and video to improve storytelling.

She thinks voice-activated home assistants — devices like Alexa and Google Home that can do commands like turn lights on and off or make phone calls — could have a major impact on culinary media. “Right now, if I ask Alexa how many eggs are in a crème brulee, it doesn’t know. I know, but I like to see what it knows, and it’ll always tell me, ‘I don’t know the answer,’” Jamila says. She thinks technology will evolve to the point where devices can seamlessly assist someone as they make a recipe featured in a Gannett publication, all without having to touch a device.

“There’s got to be some middle ground between reading a cooking book and not getting your phone full of flour and butter and sugar,” she says. “I don’t think Alexa integrates seamlessly into our lives yet, but it will, and so how can you be out front in using that as a tool for storytelling?” 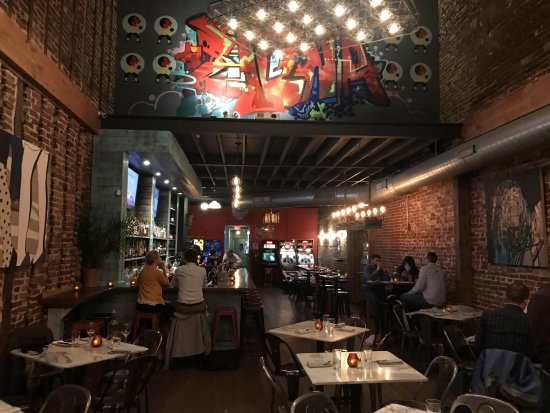 She believes that inspiring people through stories is going to be more important given that certain demographics are increasingly eating at home, and interested in learning to cook — but lacking the motivation to do it.

“You ever seen those Tasty videos?” she asks me.

Instantly I know what she’s talking about; the video clips shot from above that in accelerated time show a pair of hands from an unseen human making all kinds of dishes. I nod.

“You ever made anything from them?” Jamila asks.

“Not a single time,” I confess.

“And that’s it, there’s a certain fear to cooking, people won’t actually get up and do it” she says. But she notes that the millennial generation is about to start having children and will have to learn to cook out of necessity. The successful media companies will be those that can find new ways to use audio and video technology to engage people at home beyond simply sitting back and salivating, she says. “Those are the things I’m thinking about and trying to solve.” 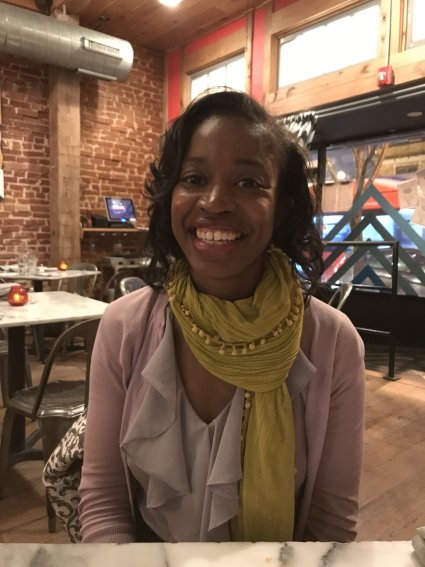 Jamila’s interest in dining and cooking goes back to her childhood in Michigan.

“The joke is that I had to learn to cook out of self-defense. My mom, even today, food is not that important to her,” she says, explaining that her mother saw food more as a necessity than a craft. “But I always really liked food,” she says, reminiscing about being in the kitchen with her grandmother — in contrast to her mother, an avid and skilled cook — helping her to make dishes. “One of the ways she’d keep me quiet is give me three egg whites, some sugar and tell me to count to 300 while I whisked it, then when I got to 300 do the other side, and that’s how we got meringue.”

She went to public school in Detroit and describes her city these days as a gritty but international destination with a strong cultural scene influenced by its proximity to Canada. In addition to her love of food, she also liked storytelling from a young age. Her high school had a journalism program that produced its newspaper in the offices of the Detroit Free Press, so from the age of 14 she was meeting people who had been in the news industry for years, in their workplace.

For university she went to Michigan State and then Wayne State University studying journalism, and a journalism fellowship at the University of Arizona in 1997 with a particular focus on her developing specialty of editing. “I always had this real love for news, real love for writing, but even deeper love for editing, wordsmithing, copy editing, making sure the words are just quite so,” she says. “I never really fancied having to be the reporter, but being in an editing role really helps other people get their writing better and I always enjoyed that so much more.” 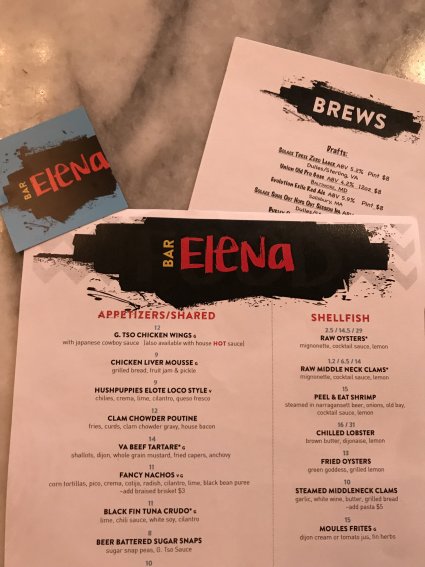 After graduation she worked around the country including stints at the Detroit Free Press as a features designer, The Washington Post as an assistant news editor, for Gannett as a designer, and at the St. Louis Post-Dispatch in Missouri. Starting with her first gig at the Detroit Free Press in April 1995, she says always placed great emphasis on making the food section visually arresting. “I love to cook and want my food to look beautiful, and have stuck with that” for work.

In October 2007 she moved to Atlanta where she worked in a variety of editing roles for the Atlanta Journal Constitution, refining her skills in coordinating food coverage — something that continues today with the work for Gannett in DC, where she started in December 2015.

She was excited to join Gannett because it promised the chance to take risks on innovative new platforms to tell stories, identifying gaps in the market and figuring out ways to fill them. “It’s all about bringing people together across the Gannett network and watching them flourish.” 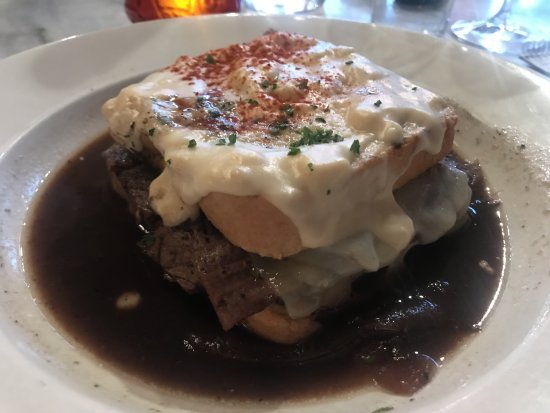 Our food arrives, and looking at the incredibly generous portions I’m glad we skipped appetizers.

In front of me is a plate of smothered brisket, albeit presented in a way I didn’t expect. The expertly cooked and tender brisket is placed between two thick slices of toasted brioche, with gruyere and cheddar cheeses grilled on top of it, seeping over the edges. Then the entire sandwich is coated with a full bowl of French onion soup. I’m getting indigestion looking at it.

“That’s why it doesn’t come with any sides,” says the water when he sees my reaction to the size of the food. But it’s good, the rich soup soaking into the brioche but not enough to make the bread soggy, creating satisfying bites blending the flavors in a cholesterol-busting but blissful mix. 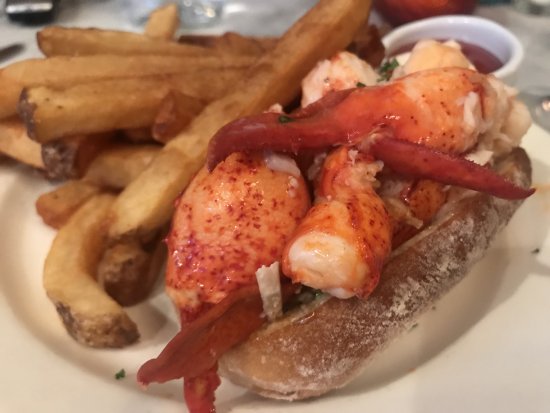 For Jamila, the lobster roll, with a baguette serving as the base for several thick chunks of Maine lobster meat sitting atop fennel slaw. It comes with a side of fries, and Jamila also remarks at the huge size of the portions. Diners visiting Bar Elena will leave neither angry or hungry.

Jamila says this is her last meal before heading to New York the next day for her work on the James Beard Foundation Journalism Awards Committee, which hands out prizes to recognize exceptional coverage of food and dining across the country. She’s a particular fan of the Local Impact award which she says “celebrates local reporting, which is shrinking in the newspaper industry, so I like to celebrate people who use food to keep ties to communities.”

After New York, she’ll be traveling to Chicago for a major restaurant awards ceremony, and both events give her the chance to learn about the latest ways that people are trying to write about food and share those stories, whether online, in print, through a podcast, or video.

And it’s clear the culinary world is a 24-hour, seven days a week passion for Jamila that happily blurs the lines between home and work life. She’s an avid cook, touting her skills at making everything from soups to pies and tarts (she says a lemon tart is her favorite thing to make). “My grandmother thinks I make a better apple pie than she does,” Jamila says, beaming with pride. 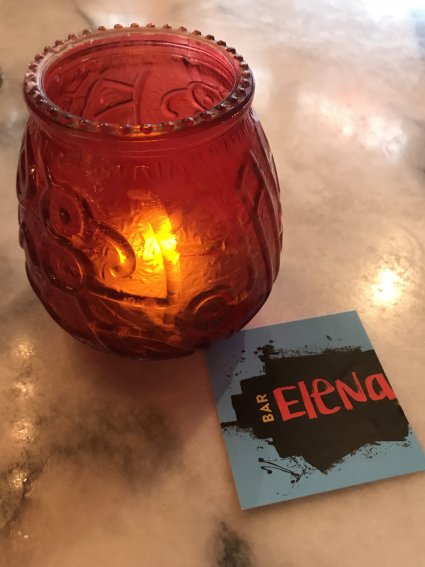 One of the reasons she cooks so much is that she is allergic to gluten and peanuts. “So I’m really afraid of buying baked goods, I’m not sure what’s going on in the kitchen,” she tells me. “I’ve had a couple hospitalizations. I don’t want to suffocate over a sandwich.”

Once she retires, she’d love to take her cooking skills and use them at her dream bed and breakfast. It’s an idea she came up with after trips to France where she fell in love with the country.

But for the present and immediate future she’s focused on engaging people in using Gannett’s publications to learn more about cooking, trying to spread her beloved craft to others.

And she also still sees plenty of promise in telling the stories of restaurants, from the chefs that help revive neighborhoods with their businesses to fostering a sense of community. “Dining is the one art form that we all participate in and it’s a way for people to meet. We use the word ‘conviviality’ when talking about restaurants and that’s a real thing. I find it very compelling what you can find out about people from what they eat and where they eat. It’s an infinite source of storytelling.”