Ah, pizza. The food of champions.

All right, maybe not champions, but I greatly enjoy this simple foodstuff. Why, I should imagine the happiest I could be would be a world where everyone and everything is made of pizza. But then I guess people would start eating each other and then it’d become a horrific cannibal world, destined to destroy itself. Let’s move on swiftly.

In Washington, DC, I live round the corner from a relatively new building development first mentioned in this previous dinner that includes a Target, Washington Sports Club, Best Buy and various other outlets. But one non-national business that’s also part of the cluster is one that turns out extremely tasty, unique pizza every day — the family-owned Pete’s New Haven Style Apizza. 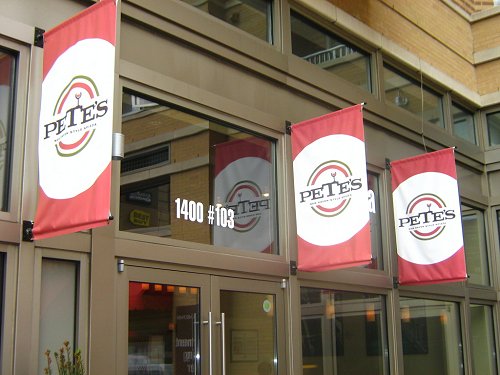 Just before lunchtime, I met up with Mike Wilkinson, a member of one of two local families who own this pizzeria, which styles itself on old school pizzerias in New Haven, Connecticut (as the name of the place somewhat obviously explains). Running late was his twin sister Alicia Wilkinson-Mehr, also a co-owner along with her husband and another couple, Tom Marr and Kerri Knowles-Marr.

Mike and I got a table near the street, in his old familiar place, him and I, face to face…

…uh, apologies for the above misappropriation of the Billy Joel lyric.

Thankfully conversation comes easy to Mike and it was like sitting down to lunch with a friend. Although we postponed the meal to the end — more on that in a while.

Mike and his twin sister Alicia are originally from upstate New York but moved to Connecticut in 1977. However, “I don’t think we started eating real New Haven style pizza till college,” he said, even though his hometown of Cheshire was home to Rossini’s, a place Mike said is a great Italian restaurant that served as a model for Pete’s. The place had the same basics as every other good New Haven pizza place: non-coal fired ovens and a shared food culture and preparation techniques. In fact, Mike liked the pizza at Rossini’s so much it was one stop — along with New Haven and New York City — on a research trip prior to opening the Washington pizzeria.

What prompted the trip and the idea to open a pizza place in DC? Alicia’s husband Joel always wanted to own a pizza restaurant, Mike said, after briefly managing a “high pressure, high volume” pizzeria in New York City in the 1990s. The couple met when they were both working in the catering industry, mainly preparing and plating high-end meals on-site at catering events for anywhere from 15 to 15,000 guests. As their careers advanced, Alicia stayed in direct line involvement with food, taking a position as a private chef in Georgetown, while Joel pursued a kitchen management track, becoming Executive Sous-Chef at the National Gallery of Art — where he would meet his eventual business partner Tom Marr.

While in New York in the early 1990s Joel had the chance to work in three different restaurant business models: a sports bar, a storefront pizzeria and a traditional Italian restaurant. “Coming away from that experience, Joel said the little storefront pizzeria had the biggest numbers, highest profit margin and presented itself as the smartest business idea of all the restaurant concepts,” Mike said, explaining the genesis of one of DC’s newest pizza places.

But what exactly is New Haven style pizza? “It’s the least famous of the famous styles of pizza, like Chicago, California and New York style,” Mike said. New Haven style originated in the early 20th century because a lot of Italians emigrated to the Connecticut town and brought their food culture with them. That culture involves fresh ingredients, “fairly unpretentious presentation and environment” and pizza brought to the table right from the oven, Mike said. “The ingredients also tend to be more artisan than from a vacuum-packed bag from a restaurant supply organization.” 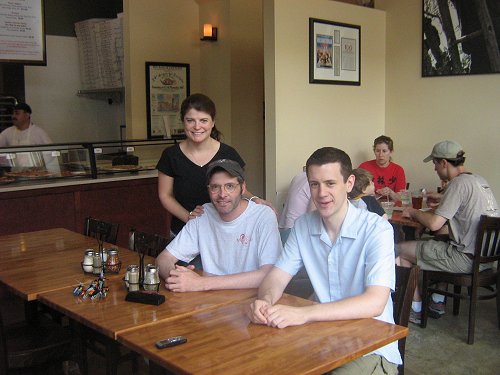 The preparation of good pizza relies heavily on the water temperature when it’s put into the dough mixture, the amount of yeast, and the amount of time it gets mixed.

Is there anything special to the twirling of the dough? “I don’t think so,” Mike said, but this is the point where another key element comes in — there’s a certain amount of material that must go under the pizza. Traditional New Haven pizzerias put a mixture of new grains and old blackened grains from the oven on the dough, which will cling to the bottom of the pizza and give it a “wonderful mixture of light and blackened material, giving it a crunch and a subtle char,” Mike added. Pete’s uses breadcrumbs and not so much old material, after all they try and clean the surface of the pizza oven through each round.

“The second key thing that differentiates New Haven style is the temperature in the oven on top and below. You see a lot of places that will prepare a pie and have it on a platter and then put it through a moving chain. The problem is that it doesn’t heat underneath, so when you look underneath it’s white, uniform and not very crispy,” Mike explained.

At this point his sister Alicia arrived. She seemed a bit more reserved than Mike, but then again it’s not every day you get confronted with an odd British man in your place of business demanding to know all about your life.

With the twins captive to my questioning, it was time to learn more about their lives — almost. First, Mike and I went behind the counter to help make a New Haven style pizza. Check out the video below for my virgin attempt at putting together a pie.

I’m just grateful I didn’t drop the thing when trying to put it in the oven.

While we waited for the pizza to cook, Mike, Alicia and I continued to chat.

Alicia moved to DC in January 1996 and lives in Petworth, a neighborhood just north of Columbia Heights. She said her hands are full with a newborn son, Mat, and a 10-year-old son, Wil (whose formal name is Peter, hence the name of the restaurant), her daytime job and also her stake in Pete’s.

Mike loves being in the Columbia Heights neighborhood, driving around and taking photo essays. He’s noticed a lot of changes in the several years he’s lived here. The complex that includes Pete’s took a good eight years to come to fruition with a a lot planning and arguing among neighborhood factions, he said. But when he first moved to Columbia Heights he enjoyed the pre-development feel of the area, which included a lot of porch-front drinking and barbecues with neighbors, something Mike said is missing today in the same neighborhood with the advent of massive condo buildings and national chain stores. “On the other hand, change is great. What we’re doing here is possible because of the change going on here.”

A little while later our pizza was ready and brought to the table. Look at that glorious thing! 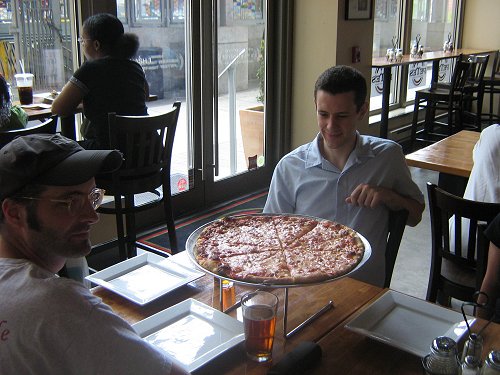 Mike and I both got a beer and as we prepared to tuck in, he very helpfully used the finished product to offer an explanation of what your oven-fresh New Haven style pizza should look like, which you can watch in the below video.

I think I did a good job.

At least, that’s what I’m going to tell myself.

Regardless, the pizza was very tasty and I can understand why Pete’s seems to be extremely popular and there are always people inside experiencing the New Haven style of pizza making. Plus, Mike was extremely generous and took a token amount of money for lunch, so the price was right. But, jesting aside (okay, there was no jesting) a quick scan of the menu showed prices that are reasonable for the high quality and welcoming atmosphere at Pete’s.

At the time of this dinner with two strangers in late May, Pete’s had recently celebrated its one year anniversary and Alicia was visibly buzzed about this. The response to Pete’s has been “very enthusiastic, we’ve got some very appreciative pizza lovers who have been sorely under-represented,” she said.

“There was a gap in the market” before Pete’s, Mike added. There are the standard national fast food chains like Domino’s and then there are popular sit-down DC restaurant locations like Pizza Paradiso and 2 Amys, which are pretty much institutions in the city these days.

“It’s a different style” at Pete’s, Alicia said. “We’re not trying to have that personal size or gourmet pizza, we wanted real old-school pizza and pizza by the slice, which is wildly popular.”

Given the popularity, are the two families looking to open more locations? Alicia said they’re looking at other locations in the DC area and expansion has always been their vision, because it’s pretty hard to make a living out of one pizzeria “unless we want to be here every day for the rest of our lives.”

And Mike is wary of Pete’s becoming seen as a franchise. “Some of the best places were things like Five Guys,” a burger joint that originated in Virginia but has spawned more than 400 locations nationwide, “But then they go franchise and there’s a huge difference in the way people treat customers when the owners are there and it’s their restaurant, versus when it’s a franchise and there’s a design style manual you have to follow.” 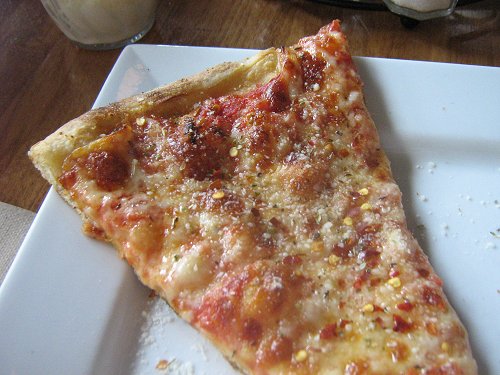 After experiencing Pete’s in front and behind the counter and having a thoroughly enjoyable lunch with Mike and Alicia, I wish them all the best in their endeavors. They’re charming people and as an added bonus they make a great pizza that honestly doesn’t taste quite like any pizza I’ve had before. Pete’s is my default pizza stop in DC now, and for that I have to thank the culinary innovators up in New Haven who came up with their style of pizza. Good job.

Goodness, I used the word “pizza” a lot in this article.