If Lars Stephan is a narcissistic, he’s the nicest one I’ve met.

However, after having dinner with the photographer Lars and learning how he got into his profession I can confidently state I don’t think he’s self-obsessed. Originally from Germany, Lars is for now living in Brooklyn, New York City, and building on a career launched online with self-portraits that, more often than not, feature himself with, well, not very much clothing.

As you can see from the initial images that greet visitors to Lars’ website, he isn’t bashful about posing nude in his own portraits. But focusing on that aspect of his work oversimplifies this engaging, friendly individual who also turns his lens on other models (male and female), and photographic topics ranging from life and travel to fashion and others.

We met indoors at Diner, a funky little place nestled just under the Williamsburg bridge in Brooklyn. Our dinner date was set for late that evening, and unfortunately my camera was not cooperating with the night sky, so the exterior shot of Diner is rather grainy. 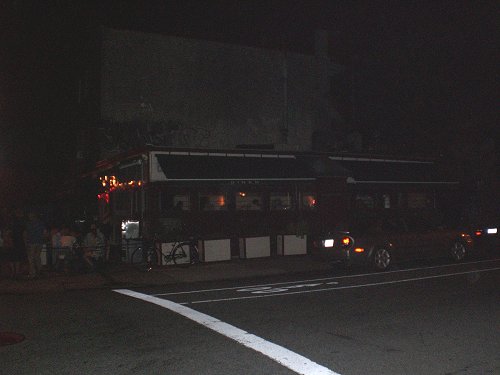 Nothing worse than taking terrible camera shots in an article that’s about a skilled photographer. Well, okay, there are many things worse, but I’m getting off on a tangent.

I was early getting to the restaurant and enjoyed the ambiance of the indoors while sipping on a Jameson whiskey with ginger ale — by the way, a great combination. The Diner is an evidently popular spot with dim lighting inside and a vibrant crowd of mixed ages and backgrounds, all drawn there by the great ambiance and, as I soon discovered, the equally great food.

A few minutes later Lars pulled up on his bicycle — his preferred method of transport for getting to and from his home in Brooklyn — and after a quick hello we agreed it was a pleasant night outside, and transferred to a table by the street. It was pretty snug next to another table, but unlike other restaurants where that might spur feelings of claustrophobia, at Diner everyone seems to be having such a good time that you’re just happy to be part of the fun.

And it’s hard to have a bad time in the company of Lars, whose accent is still influenced somewhat strongly by his upbringing in a small town near Frankfurt, Germany. He seems to look at everything with something approaching pleased wonderment, and for the duration of our one-and-a-half hour dinner I don’t recall hearing him utter a single cynical comment. 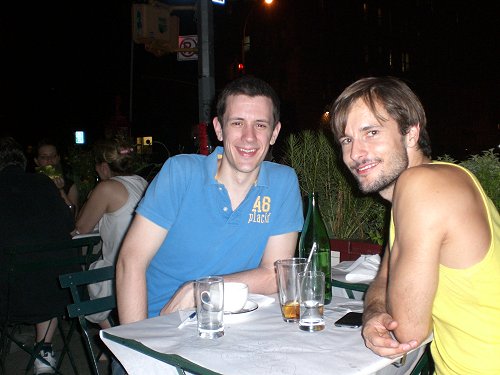 When he does talk about negative things, it’s always with the perspective that whatever bad things he had to endure have got to him to where his is today, living in his dream city of New York and in a happy, stable relationship with his boyfriend, also a Brooklyn resident.

Example of a sour experience turned good: Lars didn’t really enjoy life growing up in his German hometown, but that gave him a desire to travel and see what else was out there. That’s how he ended living in Australia for a year, experiencing life in South America, and even a stint at college in Hamburg before settling on New York City as his place of choice.

Even as a child, Lars “never really liked” his hometown and something about the place “just didn’t feel right.” However, his parents traveled a fair amount and Lars and his brother experienced a number of other places that opened up his eyes.

After the aforementioned year in Australia around the age of 16, Lars went back to finish his high school education and then college in Hamburg studying film with a minor in American studies. after that, he spent a year working for the government — something that’s mandatory in Germany, and which saw Lars toiling at a kindergarten.

Lars said he’s always had a creative bent and that in Germany “creativity is not necessarily looked on as something good. You can’t say you’re going to be a set designer or an artist, you’re expected to do something serious. But my parents said just do something that makes you happy.” So, once the obligatory state sacrifice was complete, at age 21 Lars took his parents at their word, packed up his bags and made the move to New York.

“I always wanted to come here and it seemed like in America there were so many things you can only do once you’re 21,” so it seemed like perfect timing, Lars said. Of the 35 or so countries that the Stephans visited, New York “was the only place I ever felt like I was at home, and where I feel alive,” he said. After chatting with his parents back in Germany, Lars discovered a relative living in the city and stayed with them for a while. Quickly confirming to himself that it’s his destined home, Lars has been spending most of his life in the city ever since.

Living in New York helps him discover some great places, and Diner was one of them. Our effervescent waitress came to show us the very limited menu, before proceeding to write down on our tablecloth that night’s long, delicious-sounding list of specials. Lars said this is how they operate at the Diner, and it makes a refreshing change. 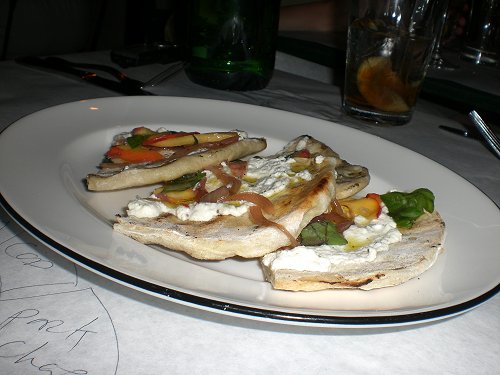 For an appetizer we shared a $9 plate of flatbread served with peaches, goat cheese, basil, bit of spice. The bread was warm, soft and fresh, and the toppings worked perfectly. It wasn’t too filling, making it a perfect way to start the meal.

We were diverted from the interview by the arrival of the bread, and after some off-topic chat, I brought things back to Lars, starting off with asking why he chose photography as a career.

“In the end, I just want to take a picture,” is a simple philosophy that Lars repeated a few times during dinner. “I’ve always liked images and the storytelling element” of photographs, Lars said, adding, “I respond to the visual aspect of whatever works.”

Despite the interest in taking pictures, “I didn’t consider myself this great photographer. It was just borne out of the idea that I want to take pictures that I like, that I’m content with. I just want to have fun” with photography, he said.

The self-portraits — including the nude shots — stemmed from a sense of therapy than any vainglorious desires. If Lars saw a guy or girl on the streets that he wanted to take a photo of, “I was too shy to say, ‘Hey, you look interesting, can I take your picture?”

Also, living in Germany life was sometimes tough for a gay man like Lars, who said that taking naked shots of himself is “like therapy, because in Germany I got called names as a teenager, I thought I was very ugly and that there was something wrong with me.” Lars got over that by taking what he described as “very sexual” pictures of himself, and it helped him get over his self-doubt because “I could see that I’m actually not that bad looking, and once I had dealt with that, I could move” on to bolder, more diverse photography, he said.

To begin with Lars would post pictures to his online Flickr account (you need an account registered with that site to view Lars’ page) and the nature of the self-portraits soon started generating Internet chatter and attention. People started contacting him and asking to have their picture taken. Lars was so nervous the first time that he refused to take any money for taking the subject’s picture because he was frightened that he’d screw up and do something wrong.

But he didn’t do anything wrong, and his photography just grew in popularity, with requests for prints and more photo shoots quickly coming in.

The growing attention culminated in a gallery show that Lars had coming up one week or so after our dinner, and it was obvious from the bright-eyed, invigorated way he talked about the pending exhibition of his work that he was looking forward to it — even if he was incredibly nervous, having just under three weeks to pick the right pictures, print them up and get everything in place for the one-day show. Still, for Lars it’s less about selling his work and more about putting his pictures in the public domain. “I’m a really bad business person,” he confessed.

At this point, our main courses arrived, so we put the interview on hold again.

Lars had ordered half a roast chicken with roast potatoes. He cut me a slice of both, and I can say he made a good choice because the chicken was tender and covered in a tasty gravy, and the potatoes were equally good. Just not sure it warranted the $22 price tag.

On Lars’ recommendation — he’s a regular at Diner after all — I opted for the cheeseburger, and it was a wise move. Well worth $13 and very filling in the right kind of way. A burger is not exactly the most exciting dish in the world, but at Diner they excel with making delicious what you’d otherwise think would be simple, bland dishes.

We finished off the meal by splitting an $8 slice of rich, perfect chocolate cake. Just ignore the bite mark in the photo below. 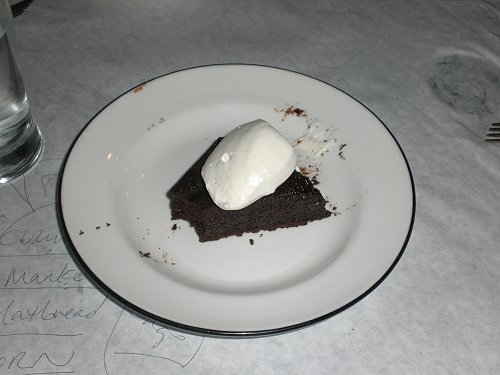 I can highly recommend Diner for a number of reasons. The waiters are all perky (in a non-annoying way) and attentive to their customers; the food is of great quality and it was difficult to find fault with anything I tried that night; and there’s something charming about sitting outside at this small diner nestled just under the Williamsburg Bridge.

As we got ready to wrap things up, I asked Lars what’s next for his photography.

He’s started a series of photographs of body parts, but is looking to approach his images from an out-of-focus perspective. It all came about when he took some photos with an out-of-focus camera but thought the resulting image was “kind of cool. I like the idea that you can’t tell who it is. Andy Warhol did something like this, but he took body parts and made them very sexual. I don’t really want to go that route,” Lars said.

That makes sense. Because for Lars it’s not about glorifying himself or boosting his ego. Rather, as he kept saying during dinner, “I just want to take a picture.”