I got there early.

Usually my incompetent timekeeping results in me arriving late to dinner interviews with strangers. But thanks to an on-time train from Washington to Philadelphia, I arrived in plenty of time for another interview in the City of Brotherly Love. 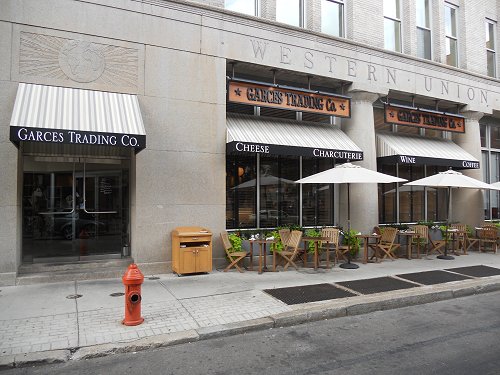 The extra time turned out to be a good thing because the venue for the lunch, Garces Trading Company, is much more than just a restaurant. The place also has an extensive wine shop, bakery, cheese and meat counters, and shelves of unique foodstuffs for sale. So I used the time to my advantage and wandered around the bright, spacious restaurant.

It’s owned by Jose Garces, who apparently won an American television show called “Iron Chef” and is something of a big deal among restaurateurs. However, I am blissfully unaware of that show and have minimal knowledge of the world of restaurant celebrities so instead I judged the venue at face value.

First impressions left me, well, impressed. The main dining area was packed with people there for lunch, with tables adequately spaced out so it didn’t look too claustrophobic. The various food counters were all well staffed, offer all manner of delicacies, and are apparently a popular destination judging by the number of customers. 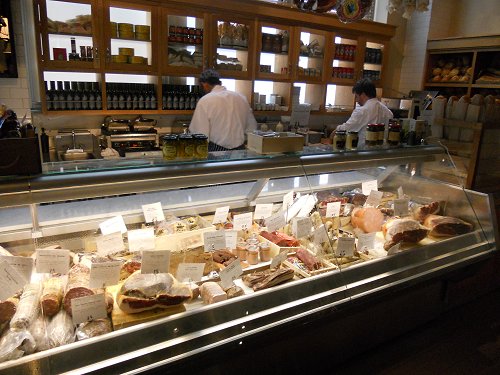 After a few minutes snooping around, the big glass front door of the restaurant opened and in walked Albert Yee, the latest stranger who agreed to dine with me.

Albert is a busy man. In addition to running a restaurant review blog, he also works at a non-profit promoting produce grown in the Philadelphia area and is a keen photographer — something he pursues both as a lifelong hobby and recently as a profitable sideline.

Despite his hectic life Albert gives off the air of a relaxed man at ease with himself. He speaks with a clear voice and lucid thoughts and very few “ums” and “ahs” in his sentences.

As we sat down to our small but not cramped table, Albert explained the “weird” liquor laws in Philadelphia and pointed out that the presence of a wine shop inside Garces was a unique sight in a city with strict regulations on when and where one can buy booze.

Other restaurants feel that Garces is getting an unfair exemption from the city’s alcohol rules, but Albert says that he’s just happy to have somewhere nearby that he or his wife Kate can go to buy a bottle of wine after the usual liquor store closing time of 9pm.

Albert and Kate recently got married, but they first moved to Philadelphia seven years ago when they were still dating. Originally they planned to stay just for the summer. They have been here ever since, a testament to how much they both love the city. 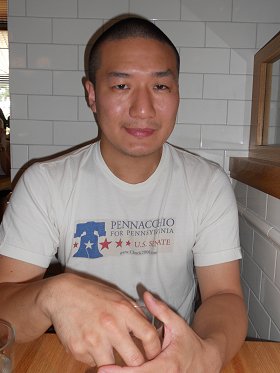 It’s an infatuation that Albert never intended to develop. He grew up in Flushing, New York, and then his parents moved the family to Westchester County north of Manhattan when he was roughly five years old. Fast forward to the college years, and Albert came to my current town of Washington, DC, to study a media-related course at American University in the late 1990s.

The course involved journalism and photography, the latter something in which he had a long-running interest. Unfortunately he didn’t have the same level of interest in Washington. “I just didn’t like DC, and I wanted to go home to New York,”

Nowadays the American capital city “has gotten much more friendly to people under the age of 35. But when I was there, if you were under 35, it sucked. There was not a lot of fun stuff to do compared to New York.” So, restless with life in DC, Albert moved back to New York and enrolled at the State University of New York College at Purchase. That’s where he studied layout design and programming, and was told it’d take two to three years.

“My girlfriend and I just decided to have an adventure”

That was fine with Albert. Except two years into the course, the school changed the program and said he’d have to start all over again. “It was really annoying. I was having fun doing what I was doing, but I didn’t want to start from scratch,” he said. Albert already had enough credits to graduate immediately with a liberal arts degree, and that’s what he did.

In addition to gaining a degree, he also gained a girlfriend. The two met while he was still in school. After a few years of working at what he described as “dead-end jobs” in New York, Albert was laid off from a technology company that was downsizing, and so he and his girlfriend “just decided to have an adventure” and move to Philadelphia.

Why Philadelphia? They wanted to stay in the Northeast, because both their families live in the region. “New York was too expensive, I don’t like Boston or DC, so Philadelphia was left.” Yet Albert had never visited Philadelphia before the move down there.

After the move, he got a job doing sales for the alternative weekly newspaper Philadelphia Weekly. But cold-calling customers to sell advertising space in the paper just wasn’t for him. “Pounding the pavement to sell ads wasn’t my personality. I can’t sell you on a product that I don’t like. I like the Philly Weekly, but not the notion of selling ads.”

Unfortunately he quit when the economy was, as he put it, “jumping into the shitter.”

That’s when he started concentrating on making money through his photography. Even as a child Albert was “always using a camera” and taking photos whenever he could. One of the attractions about photography for him is the idea of finding a good shot and being responsible for the lengthy dark room process of developing the film and producing a high quality picture. “It’s a really cool organic process, and every time it’s fun,” he said.

>His main interest is street photography — pictures of every day events such as people waiting for the bus stop or children playing around. But he also likes doing staged portraits, weddings and other big events, always with an eye for a good shot. “I keep finding beauty in everything,” he says, most recently finding it in the urban decay of parts of Philadelphia.

How did he start using his photography for money? First taking photos for a few friends, and then through word of mouth and cold-calling people. Contrast that to his hesitance to do cold-calling at the Philadelphia Weekly, because here’s something that Albert is interested in and happy to push. Over five years his photography has reached the point “where people know my name a little bit” so he gets unsolicited calls for work.

But photography wasn’t bringing in enough money, and so he found work as a supervisor with the Fair Food Foundation. They specialize in connecting local farmers with restaurants and other venues in the city. From the animated way Albert talked about promoting local produce, he really seems to enjoy his work.

That could be because he also enjoys food. A lot. Not in an obese, mouth-stuffing way, but more a genuine passion for finding good things to eat. It also helps to explain the genesis of his blog, “Messy and Picky,” through which he and Kate review restaurants in the city.

When our first courses arrived, I wondered how Albert would review Garces. 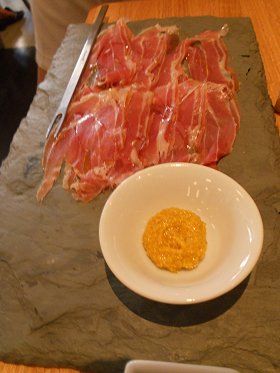 There was a rather lengthy brunch menu and Albert opted to start with a serving of proscuitto cured in salt. For $8 it seemed reasonably priced and he said it was “excellent.” 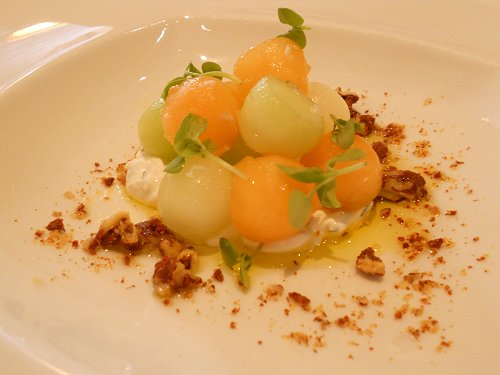 I went for the $25 brunch menu which lets you order two items. First up was the fresh summer melon with mint labneh and spiced pecans. The melon was indeed fresh and very flavorful, and the mint labneh gave the dish a nice kick, topped off with the crunchy pecans.

Good start. But there was more food to try before I could ask Albert what he thought of Garces. So instead he told me about the reviews he’s done for his blog.

He and Kate started “Messy and Picky” to keep track of the restaurants they visited and whether they liked a particular venue. Just so you know, Albert is “Picky” and Kate is “Messy” — a nickname not earned because she has appalling table manners (Albert said she doesn’t) but because she naturally tends to be a messier eater than most.

Albert is picky in that he likes his food a certain way. For example, growing up in New York, “I have a certain idea of what a bagel is. A bagel is not bread with a hole in it, a bagel is boiled then baked, crusty on the outside and chewy and soft on the inside. It has a thick consistency that’s just New York bagel consistency.” He’s also picky in the sense that if he orders a burger medium-rare and it comes out anything but medium-rare, he’s definitely going to send it back.

>Albert and Kate’s tastes have changed over the time (although one thing has remained consistent in that he’s an omnivore, she’s a vegetarian) they’ve been doing their blog, he said. “Now we’re more conscious about what we’re eating, the social aspect, the environmental impact of things, and we try to eat more locally, and more in season when things are at their peak.”

The evolution of Albert’s palate means that now he won’t eat food that is out of season, such as strawberries in December. “The taste is just so extremely different that the wait until it is in season is worth it for me. Otherwise, it’s just not going to taste as good.”

Their blog now has a decent audience, and a group of Philadelphia food bloggers get together every three months for a pot luck dinner that Albert said is a lot of fun.

Albert and Kate have had good luck with most restaurants, so there is rarely the need to write a bad review. But Albert said he’s willing to put a place down if it’s bad — a slight problem with Kate who “wants everyone to be friends. I don’t think it’s plausible. I would love to get along with everyone I meet but it’s not going to happen. So I would be happy to write a bad review about a restaurant, but she would rather not.”

The one bad review that has featured on “Messy and Picky” is for the Italian chain restaurant Buca di Beppo. Albert said the Philadelphia location served up “flavorless” food and was “one of the worst dining experiences we had.”

What about the best? Before I could ask, the waitress returned with our second courses. 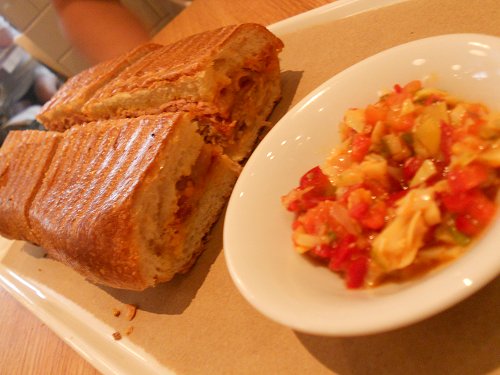 Albert went for the $12 “El Cubano Clásico” sandwich of roast pork, ham, gruyère, mustard, and pickle. Like with the first course, he was a huge fan of the dish. 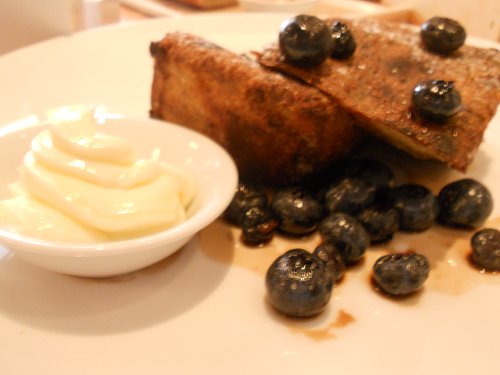 I chose the blueberry muffin French toast with Lancaster County maple syrup, goat butter. The syrup was rich but not too sweet, and the French toast was moist and delicious. The one problem was the sheer size of the dish, which made finishing the thing impossible.

Judging from how Albert reacted to his meal, I think he would have given Garces a thumbs-up. The best restaurant he’s experienced to date however is Southwark in Philadelphia, which serves up plenty of food made with locally grown produce. The food is well made, the portions are large and the place has a good atmosphere, he said.

The way that Albert spoke about the restaurant, his friends in Philadelphia, his current job and his general experience in the city made it hard to see him leaving anytime soon.

Indeed, as we were wrapping up lunch he said, “I’ll be here indefinitely unless something awesome or lucrative comes up. I have a great network of friends and acquaintances and it would be hard to leave them and annoying to develop it all over again. In the near future, I don’t intend on leaving.”