“I had to promise Eric Idle I wasn’t giving up on 50 years of sworn heterosexuality,” Jim Piddock said as we sat down to what easily could have been mistaken for a man-date.

Rather, it was the second dinner with a stranger I’d ever attempted and already my favorite so far. Yes, I’m aware it’s easy to pick a favorite from just two dinners. Actor, writer, and all-around nice British ex-pat Jim said he spoke with his good friend Idle before taking up the offer of dinner during my recent visit to Los Angeles, and mercifully thought it might be a fun and different thing to do — as well as being a free meal. And, Mr. Idle, I can promise you, it was also not a man-date.

The location was Mistral, a French bistro in pleasant Sherman Oaks, California, which feels like a million miles away from the smog and insincerity of downtown Hollywood. 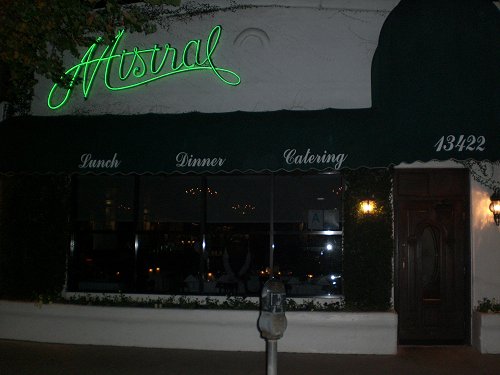 I arrived a little early (a first given my usual shoddy timekeeping) and was immediately greeted by a host of affable staff members, who escorted me to the bar to wait. Even better, the bartender must have thought I looked gaunt because she served up two cheesy vol-au-vents to tide me over while I waited. While they were warm and light, the cheese was mild, sparse and not too flavorful. Ah well. Better luck with the entrées, right?

Lifting me up from the cheesy puffs plain palate predicament, Jim entered the restaurant and we took our seats. Large table, plenty of space, loud enough to give the venue an air of busyness but thankfully not too raucous to either have to shout across the table — that can be ever so embarrassing if you accidentally spit while yelling at your dining partner — and quiet enough so that my tape recorder managed to pick up most of the conversation.

Before we got to the interview, we scanned the menu for options. Jim settled for the grilled Wild King salmon for $29 while I played it safe by choosing angel hair pasta with diced tomato and chicken breast for $22.

It was Friday night, so I was more than happy to split a bottle of wine during dinner to get me pleasantly light-headed before heading to a friend’s bar in Hollywood later that evening. I’m generally inept when it comes to wine lists and so after pretending to look like I knew what I was doing I handed it over to Jim. He effortlessly scanned the list and decided on an $80 bottle of California Merlot from the Duckhorn Vineyards in Napa Valley. It was a good choice. Not too heavy, a nice fruity taste and tasted like it was worth every dollar.

While we waited for the food to arrive, it was down to interviewing business. As a Brit living in the United States, one of the questions I get frequently — other than, “Sir, can you please leave our establishment?” — is how I wound up in America. Lacking an original spark, I decided I’d pull the same question on Jim. The one about moving to America, that is. He doesn’t strike me as the kind of guy who is often asked to vacate places.

Well, Jim went to university at Kings College in London and then attended the Drama Studio acting school. From there, it was on to regional theatre doing weekly and fortnightly rep, and before long he was asked to direct a play at drama school. So far so good.

The Drama Studio then opened a place in Berkeley, CA, and asked Jim if he wanted to travel over to the States for three months to direct and teach improvisation to students mostly around the same mid-20s age as him. He did, and moved overseas.

But impatience and a yearning to get back into acting led Jim to organize a one-man show. He secured the rights to Peter Flannery’s play The Boy’s Own Story — a soccer-centric production dubbed “the loneliness of the long-distance goalkeeper” — and faced an uphill struggle trying to get it staged because as Jim admits no-one in town knew who he was. Nevertheless, that greatest British quality, the ability to persevere, led to the play being produced in a small 99-seat theater. And yes, I’m biased toward British people and their ability to be pretty much brilliant, always. Ahem.

With that, it was opening night. “I really just wanted to exercise a few muscles and do something I’d never done before. It terrified me the idea of it, but it was one of those wonderful things and became a huge hit,” Jim said. A handful of friends turned up the first night, followed by a similarly small group the next. But then the reviews started to come in and good word of the show spread, with tickets soon selling out for its two month run. Success led to an extended run for several more months and soon people were asking Jim to perform the play across America.

It was an invite from a producer in New York that finally got Jim’s interest, and he flew over to perform it…only to have the producer pull her money out the day he arrived. Not to fear. He started to circulate a taped recording of The Boy’s Own Story and quickly secured an agent, taking his first audition a few weeks later for a George C. Scott Broadway play.

As luck (and I’m sure talent) would have it, the part went to him and within just months of arriving in Manhattan found himself on stage with other relative newcomers Nathan Lane, Kate Burton and Christine Lahti. “It was an amazing cast, a huge hit, it ran for eight months and then I had a career.” Snowballing from there, his Broadway career lasted for almost three years, including the first U.S. production of Noises Off, which he puts down to being “really lucky and being in the right place at the right time.” A far cry from the first few months in America, when Jim recalls writing in the diary he kept back then that he had to survive on $10 a day for three weeks. 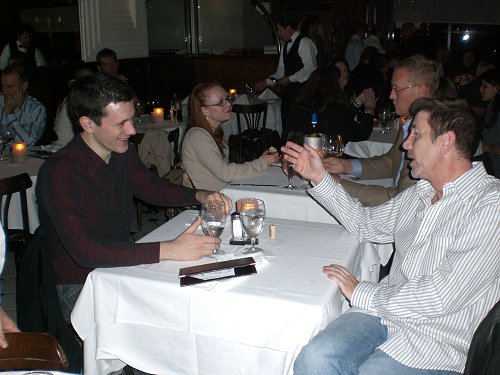 Not surprisingly, Jim’s success on Broadway meant he no longer had any desire to go back to England to do weekly rep in a thrilling hot-spot like Weston-super-Mare.

But after a while he started to feel burnt out doing eight shows a week, and a relationship with the future Mrs. Crocodile Dundee Linda Kozlowski was “heading South” so Jim decided for a fresh start by moving to Los Angeles. He was “kind of bored with plays, and couldn’t see myself staying and becoming a Broadway queen” and instead used the move to the West Coast as an opportunity to take a therapeutic year of writing and doing some theatre and television roles. It was the first screenplay Jim wrote, with a collaborator, that sold and then suddenly he had another writing career.

The writing continues to bring Jim success. Most recently he sold the story idea for the currently-filming movie Tooth Fairy, which he is also executive producing. Designed as a PG crowd pleaser, the movie is about the ultimate macho man Dwayne Johnson (don’t call him The Rock, or Rockster, or Rocky Baby, Jim advises) who is forced to serve a week as the tooth fairy, a task that’s more like jury duty than anything fun. Naturally, there’s a screw-up and Mr. Tough is forced to wear a female fairy outfit — “and it completely destroys his life, every time he’s about to do something he gets transformed into the tooth fairy and has to do his tooth fairy duties.” Due out next Thanksgiving, the movie also features an impressive cast including Julie Andrews, Ashley Judd and Ricky Gervais’ comedy partner Stephen Merchant, all of whom Jim has nothing but effusive praise for.

Jim’s also writing a possible web series of news special parodies — more on that in a moment — but acting is still what he enjoys the most. In 2007, he made five or six movies and it was “the happiest I’ve been in years.” This year, he’s got his Tooth Fairy duties (without the dress and wand, naturally), has written a couple of scripts and while it’s been a more profitable path he said that he didn’t have nearly as much fun as acting.

So that’s Jim (disclosure: the first time I saw him was his hilarious turn as a commentator alongside Fred Willard in the Christopher Guest film Best In Show), and he’s incredibly pleasant dining company, putting a random stranger like myself completely at ease. Honestly, two men meeting randomly like this is — at least as I start up this site — a little odd, but once dinner and the drinks began and Jim started talking I had a great time.

Mistral was a good choice. The food was tasty, so much in fact that he and I both started eating before I remembered that I should probably get pictures of our dishes for the site. 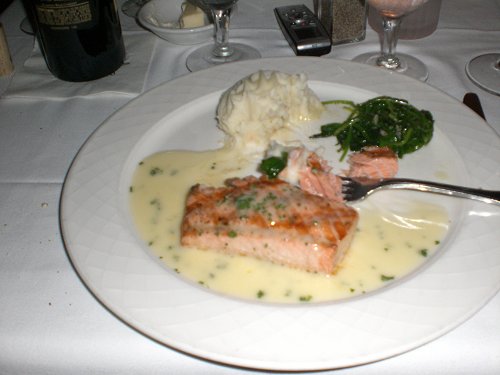 Jim spoke positively of the salmon, which apparently came with some mashed potato and green beans. 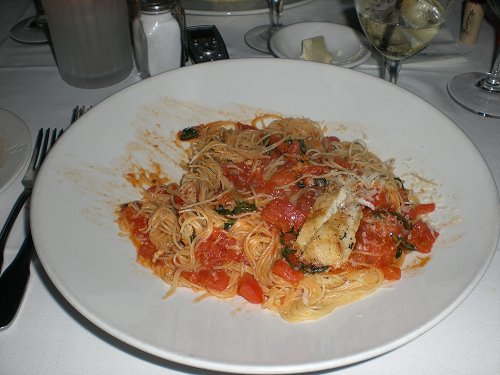 And I though the angel hair pasta and chicken breast was as delicious as that rather by-the-book dish can get. It’s my fault for picking something that’s not exactly tastebud-blowing, but then again I don’t want to become a Debbie Downer, so let’s move on swiftly.

I realize this article focuses a lot more on Jim than it does Mistral, but mercifully that’s because he’s very interesting company. My backup plan for this site is always to write up the restaurant more than the interviewee if said stranger is a dullard, but that just wasn’t the case with Jim, and there is plenty more that I could have written.

But before I finish, I should mention the news parodies I teased further up.

Getting back to Jim’s vow to Eric Idle that he wasn’t giving up on a heterosexual life, after dinner he invited me back to his place for two reasons, (1) just to make it entirely awkward and (2) show me the news parody project he’s been working on. 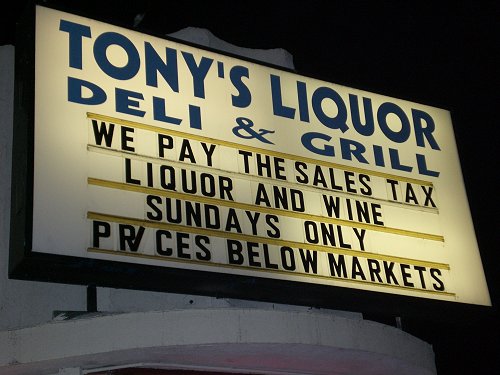 After stopping off at Tony’s Liquor Deli & Grill (the owner shares my name, woohoo!) to pick up some wine, it was back to his house and he started up his preview of 25/7. It’s a parody of news programs such as 60 Minutes done in the oh-so-serious style of Christopher Guest films that don’t wink at or even acknowledge the Fourth Wall. Jim’s idea to take “pretty outrageous, edgy areas that we want to enter and make it as offensive as possible. It’s done without a single nod or a wink so that you think you’re watching a normal news story for the first few minutes.”

The three news segments that Jim showed me featured him as the interviewer on a host of great ideas, including an uncomfortable-but-hilarious sketch featuring the human equivalent of dog collars for people with Alzheimer’s disease who tend to wander off at the wrong moments. It’s still in the rough stages — I think the studio host of the show that ties the segments together could benefit from a more fleshed-out, defined role — but it’s very subtle, knowing humor that should easily find a sophisticated audience online. Hey, if a fat man falling off a chair can get more than 500,000 views then there’s going to be a much bigger market for Jim’s 25/7.

After chatting about the show, it was time to head on out. Said my goodbye to Jim and was very grateful that he had agreed to be the second dinner with a stranger for this site, I don’t think it could have gone much better. All in all, it was a great platonic man-date.

And Mr. Idle, I can promise you, Jim’s vow is his word.