Like the saying on one of those t-shirts with the love hearts you can find from any street vendor in Manhattan, Gretchen Auer hearts New York.

Gretchen, born and raised in Ohio, long harbored a desire to move to the Big Apple and over the course of a Sunday morning brunch in Hell’s Kitchen told me about achieving that goal. 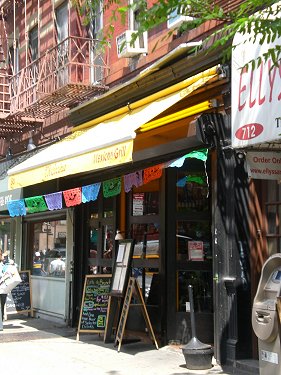 We met at Ta Cocina, a brightly-decorated Mexican restaurant. I was running late and Gretchen already had a table. She was mercifully nonplussed about my tardiness, which I put down to a combination of late-running subway trains and general incompetence. Whether that incompetence was mine or the Metropolitan Transportation Authority’s, I’ll leave you to decide.

After ordering the first of several mimosas — $10 for an unlimited hour’s worth of the delicious champagne and orange juice drinks, woohoo! — we began the latest dinner with a stranger (it was really brunch with a stranger, but never mind).

Gretchen’s from Ohio, born in Coshocton and went to high school in Dayton. She graduated from Ohio State (OH-IO!) with an English degree but “I didn’t know what I wanted to do” so she spent a year working overseas, including time as a waitress in Ireland and a stint in London working for Laura Ashley, which makes a “range of home furnishings, women’s and children’s clothes, flowers and gifts,” according to the company’s handy self-description.

Her work permit expired, then “I got convinced that San Francisco would be a good idea” because her brother had moved there the year before. Despite Gretchen’s strong desire to move to New York City — “I really wanted to come here” — her parents convinced her to try the city by the bay. She hated the hot and humid weather in Ohio and her folks suggested that the weather in New York wouldn’t be much better, whereas on the West Coast it would never get above 70 degrees or below 50 degrees. So in the end, San Francisco was her first port of call. 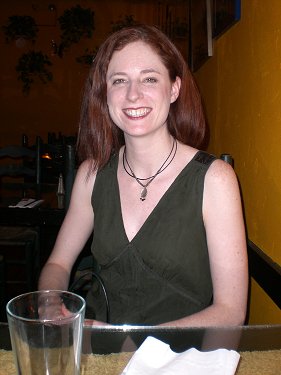 Gretchen said “you have to live in a city for at least a year to figure out if it’s right for you” and even though 12 months later she knew San Francisco wasn’t her preferred place, she stayed there for three-and-a-half years. By this point in her career she was getting more involved with interior design work, following on from her time with Laura Ashley. “I figured there was no other place to be for the interior design field but New York, so I transferred my job” and that’s how she finally ended up in her dream city in 2001.

As with any move there was upheaval, and for Gretchen this came in the end of a relationship with a guy she’d been dating in San Francisco for two years. “I probably started breaking up with him after the first few months,” she said, but it took the move to the East Coast to seal the deal. “If you really want to end a relationship I highly recommend living on the other coast, that will do it.”

Gretchen arrived in New York shortly before the Sept. 11, 2001, terrorist attacks, and was living on Canal Street near Ground Zero at the time it happened. “I just got out of San Francisco before what I was sure would be a major earthquake any minute that would be really bad, I get here and then [the attacks] happen.” Shortly after, she decided to move uptown to get away from the area.

Gretchen was working at a job that she realized couldn’t support living in the city, so she started scouting around for part-time work. In that process, she found “what I thought would be a better full-time job, even though I wasn’t looking for it.”

That job was, and still is, with Stark Carpet, which sells high-end Italian rugs and carpets. While the name “stark” doesn’t exactly inspire images of lavish furnishings, Gretchen says what’s on offer is quite the opposite of bland. She works in the showroom, and loves the diversity of the job: sometimes making appointments with clients, out on site visits to furnishing jobs and checking in with clients, and, “It’s not like I’m sitting at my desk all the time doing one thing.”

Good job, dream city — Gretchen found New York to be everything she hoped for.

Even better, “it’s not as expensive as everyone makes it out to be. Like this brunch,” she said, which lets me make a semi-tenuous connection to reviewing the food at Ta Cocina. Gretchen found a great place for our meal. The food is your standard Mexican fare (burritos, quesadillas) but tasty and cheap. 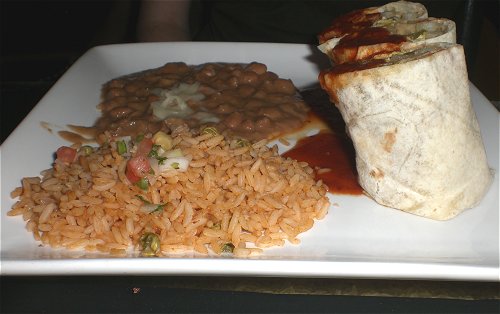 Gretchen ordered her favorite dish at the restaurant, the breakfast burrito for $9.95. She got a very generous portion that was more than enough for one sitting, so she took the rest home. 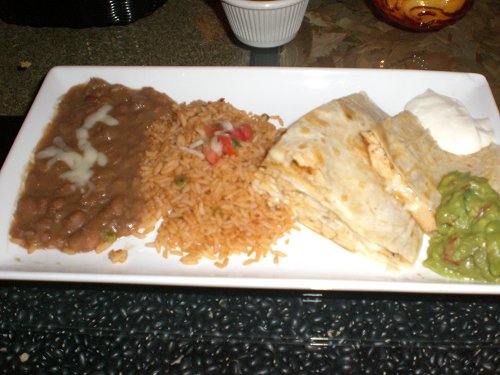 I ordered the chicken quesadilla which also cost $9.95. I thought the price tag was perfect for what was a simple but well-done meal. With the $10 mimosas thrown in, the total after tax and pre-tip came to $32.40. Perfect for two people on Sunday brunch, and definitely a place I would consider again next time I’m looking for an inexpensive breakfast or lunch in Manhattan.

Ta Cocina is just one of several favorite places Gretchen likes to dine at in New York, and she is a fan of the restaurant experience. “I don’t understand take out, part of the experience” is the ambiance of a restaurant, she said. And many of her favorite places are cheap, an added bonus.

The expense of New York City is what you make it, Gretchen said, and she manages to find inexpensive dining spots and activities. She even has a reasonable argument about the typically high Manhattan rents: that while the price tag for a small apartment might seem a lot, there’s no need for a car. So if you subtract what someone in another city would be paying for insurance and petrol, you arrive at “what would be a normal rent elsewhere,” she said.

“New York is really cool. There’s so much to do”

Gretchen lives in an apartment without a dining room — another reason she likes to dine out — but she loves the fact her place has a “decadent walk-in closet that has become a dressing room. It’s so over-the-top” with fittings including a 5ft by 6ft handmade Italian mirror, “and it’s a great space to sit and stand, and have people come and hang out in my closet. We can play dress-up and drink in my closet before going out on a Saturday. It’s really fun.”

She even loves the walk to work, because every day her route includes the sights and sounds of Times Square. “It’s really cool. Maybe you have to be a girl from Ohio to appreciate walking around there. I don’t even take advantage of all that’s here. There’s so much to do.”

And what does she do in her spare time?

She just joined a chapter of Business Network International, a “hardcore” networking group that meets at 7am every Wednesday for breakfast, where people mingle, talk, try to get referrals for business and look for others who may need their services. I’m dead to the world anytime before the clock hits 8am, but Gretchen said, “It’s not getting up that’s the problem. It’s 2pm, that’s the problem, when you realize you’ve been up forever. But the group is fun, and I like the people in it. It’s nice for an hour to talk positively about my business and moving things forward, and then I am usually more focused and motivated when I’m at work.”

She also likes going to see shows in the city — in fact, she’d been to a performance by electroclash duo Fischerspooner the previous night — and generally seeing the sights that New York City has to offer. And while her agenda doesn’t usually include Central Park, Gretchen said that taking a boat out on the lake in the park is a pleasant, relaxing experience. 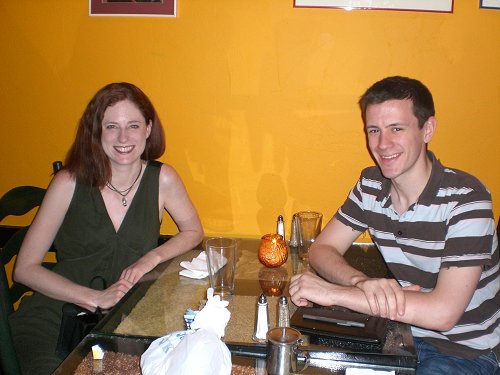 It’s pretty obvious Gretchen loves New York and is delighted to be living there. But she still retains that stereotypical Midwestern lack of pretension, and she definitely notices a difference in attitude after experiencing service in the city. “I’d want to hire Midwesterners or Southerners, because in Ohio they’re much nicer” than some of the service in Manhattan.

After my recent visit to Brooklyn and a dinner with a stranger at AOC Bistro — a place where apparently customer service is a foreign concept — I can see where Gretchen’s coming from.

Hey, look at that, I managed to wrap up this article and link to another one. Go me!

One thought on “#8 She Loves New York”