I rode in a clown car.

On a Thursday night in March, I stepped into a clown car. Full disclosure, it wasn’t the usual kind of clown car with doors that fly off or that explodes when it comes to a halt. Rather, it was a large regular car driven by my sixth dining stranger, Diego Barquinero — also known as VeeKay the Clown.

I was staying with friends in Santa Monica, California, and landed at Los Angeles International Airport very early that morning. Trying to readjust from East Coast time to West Coast time is tricky enough for me, but I really started to doubt my mental faculties when I noticed the man in full clown clothing and makeup waiting in a car outside my friend’s place.

But like Longfellow Deeds, it turns out I was sane all along because Diego, 54, was working earlier that day to promote the circus he works for and didn’t have time to change before dinner. I don’t drive, and he gracefully offered to pick me up and take us to our dinner destination, which explains how I ended up in a clown’s car that night.

Our spot for dinner: The Counter, a relatively new burger place in Santa Monica. 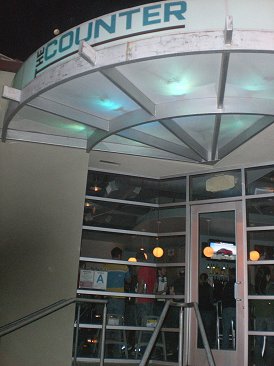 We got a few odd looks walking the block from Diego’s car to the restaurant, but ever the showman he took it entirely in his stride, waving cheerfully to young children and trying to a put on random strangers’ faces. Can’t argue with that.

Despite the crowds at The Counter we immediately got a seat and an effervescent waitress who was entirely not bothered about serving a circus star and an odd Englishman.

The menus at the restaurant are something to behold. Brought out on clipboards, at first glance it looks like there are a million-and-one options for your custom-made burger, ranging from imported Swiss with a fried egg and relish to peanut sauce drizzled over a veggie burger topped with avocado. Hooray for choice!

I wanted to get down to the interview and find out Diego’s life, so we quickly put in our orders. He opted for a beef burger with mixed greens, black olives, lettuce blend, avocado and Jalapeño Jack cheese. My selection was far more bland: beef burger with Gruyère and tomatoes. Hey, stop criticizing, I wasn’t that hungry! To top it off, we ordered a side of fries to share.

And then it was down to interviewing business. Ladies and gentlemen, the picture below shows you Diego as he was at the restaurant, dressed in his daily work role as VeeKay the Clown.

VeeKay comes from the letters V and K of Veranda King, the name that Diego used to have in a past gig performing for the crowds in Disneyland’s New Orleans Square, playing the role of a charlatan, entertaining visitors with sleight of hand tricks and the like. It was there that the Circus Vargas company spotted him, eventually leading to his current career as the circus’ official promotional clown.

But I’m getting ahead of myself. How does one even get into clowning in the first place?

Born in Buenos Aires, Argentina, Diego was diagnosed early with a learning disability and a rare condition known as Ehlers-Danlos syndrome which means he had elastic skin and double joints. Instead of going to school, his father taught him clown routines.

At the age of six, he performed in a quintet of young children singing at schools and local fairs. When Diego was eight years old, a visiting circus saw the act and made it part of their sideshow as a novelty. But when the parents of the other kids found out the circus was run by gypsies they pulled their children out. Diego remained.

The sideshow director saw Diego’s unusual gait and look, and dubbed him a “Wild Boy” to perform as a solo act entirely different from the singing quintet he was once part of. “The rumor was that I was raised by dogs,” Diego said. He would perform for circus visitors by pretending to truly be a wild child, snarling and barking and bending his body in strange ways. It would culminate in a routine where he escaped from the cage he was kept in and the clowns at the circus would chase him around the big top.

One might think such a life would have a negative impact on a child, but Diego embraced the applause and enjoyed his childhood in the circus, taking particular pride in being made an honorary clown one night the circus was having a big party. Eventually he started doing more clownish antics and less of the Wild Boy routine.

Then Diego’s mother passed away and his father couldn’t take care of him, so he was sent to California to live with his uncle’s family. Diego has lived in the Golden State ever since, mostly in the Los Angeles area.

Naturally, LA is a prime location for entertainers to find work, but when Diego was older he tried something else. “I was thinking of being a doctor, and tried to be a naval corpsman. I was planning to follow it as a career but I became ill, and because of that I was unable to continue to do the schooling.” Diego said he tried a few random careers afterward but nothing really stuck, and so it was back to clowning from then on.

His career in the United States really began at Disneyland in California, where he would perform as a clown or mime to entertain the visitors to Mickey Mouse’s overpriced kingdom. And that’s how eventually he landed the role of the aforementioned Veranda King.

It was in 1986, while working at Disneyland, that Diego was spotted by a representative from the classic Ringling Brothers circus who asked him to come do some clowning work for them. It’s important to distinguish clowns, Diego said, between the whiteface clowns “who are more like the ringmaster of the circus” and the exaggerated clowns with rubber noses, comical facial expressions painted on, and always acting like the joker. Diego — or while at work, VeeKay — is in the mold of exaggerated clowns as the pictures in this article show: bright red hair, painted face, billowy colorful clothing and of course the obligatory over-sized clown shoes.

Diego even wanted to attend Ringling Brothers’ clown college (yes, those places really do exist). “Some of the best clowns ever came from that college,” Diego said, adding that he was sad to see the college close in 1998. While he did not end up enrolling there, he was certified to represent the clown college at Ringling’s Smiles Across America event. Ringling Brothers “opened a lot of doors for me,” he added, and his work there helped him get noticed by the classic big top Circus Vargas.

Diego/VeeKay began doing a few shows to help fill a clown shortage at Circus Vargas. By the way, if you’re wondering, no, I never thought I’d type the words “clown shortage” until now. The circus loved his work then “they invited me to come back and do promotional work, and that’s what I’m doing now,” Diego said. In fact, Diego’s business card lists him as VeeKay – Promotional Clown. His days now are packed with promotional appearances, traveling fairs and shows around the country, and even appearing in the occasional television show to plug the circus. 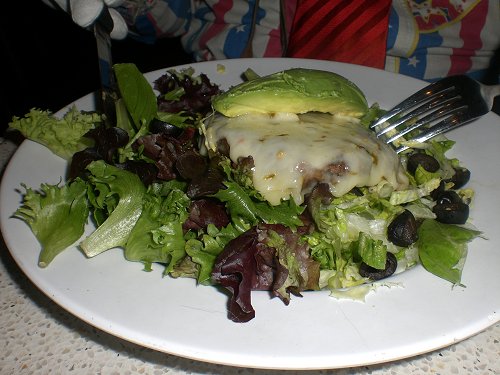 When our burgers arrived we took a break from our interview to enjoy the food. Diego’s burger was overloaded with healthy greens and he said he thoroughly enjoyed his dinner. Indeed, he devoured a lot of the dish and said he really liked The Counter as a dining venue.

My burger, while admittedly on the bland side due to my own menu choices, was juicy and perfectly cooked. It was very filling and I had an empty plate by the end of the meal. Diego and I both agreed that the roughly $30 total for both burgers and fries was good value for money — particularly for me, because Diego very kindly insisted on paying for dinner.

I quite liked it the look of The Counter. Simple furniture (metal chairs, plain tables) are dotted around a relatively small space that seems to pack more people in than possible, but still it doesn’t feel like you’re awkwardly close to the next table. Huge windows looking out onto the street pour light inside, and all in all it’s a great atmosphere. And Diego was more than happy to entertain some members of the friendly crowd that the place seems to attract.

Entertaining people for a living must be a pretty nice gig, right? Well, Diego said there are some drawbacks, in particular the effects of coulrophobia — the wonky term for a fear of clowns. I saw the television movie version of Stephen King’s IT, in which an evil clown/alien/monster terrorizes a small town, and was sufficiently freaked out by Tim Curry’s performance as whiteface killing weirdo Pennywise the Clown. Incidentally Diego says “as scary as [Curry] was that was a true clown’s makeup” in the television movie. Television gets something right for once. Yay!

“I love to see the reaction of the kids”

I don’t suffer from coulrophobia — probably obvious from the fact I sat down to dinner face-to-face with a clown — and I was surprised to hear of some of the reactions that Diego has received from people who really are afraid of clowns. At the Orange County fair in California one time, “someone came up to me and was absolutely silent until he punched me in the face.” The guy apparently cited coulrophobia as the reason for his punchy behavior, but it seems a pretty rude and mean thing to do.

Still, the handful of adverse moments don’t get Diego down. “I love to see the reaction of the kids” whenever he’s performing, he said, adding that it’s “very rewarding” to do work at schools for the deaf or shows aimed at teaching children to read, or learn English, or get along with each other.

Added bonus: Diego’s wife likes his career. In fact the two met while he was performing in a show. “I saw this young lady in the audience and she was the most beautiful woman I’d ever seen, I couldn’t keep my eyes off her. I decided to invite her and her father out for lunch, but it took me six months to convince her to go on a date. I had to wear her down,” Diego joked.

Diego’s wife loves to make VeeKay’s wardrobe and is responsible for his Zoot Suit, an elaborate style of dress with large, broad-rimmed hats, over-sized colorful jackets and high-waisted pants. “My wife made everything except the hat, which I got at a Zoot Suit store, and the clown shoes” that complete VeeKay’s outfit, Diego said. That night, I tried out VeeKay’s suit and from the picture below I think you’ll agree I look quite handsome. Ahem. 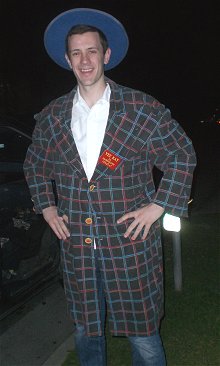 When Diego and his wife aren’t living the circus life they like to work on their house in Los Angeles and are avid gardeners with a fondness for exotic plants. They also have two dogs that take up a lot of their time and affection.

But every year like clockwork circus season rolls around, starting May 1 — also known as every clown’s birthday — and VeeKay is back on the road. How long does he intend to keep clowning around? Diego said, “There’s an old saying that a clown never retires, he just blends into the sawdust. I like that idea.”