At the end of our brunch, however, it was all too easy to conjure up that same image. For as I learned during our afternoon tea Teresa is an incredibly outgoing and very hardworking woman (she has three jobs) who takes delight in embracing her role as a saleswoman for adult products. 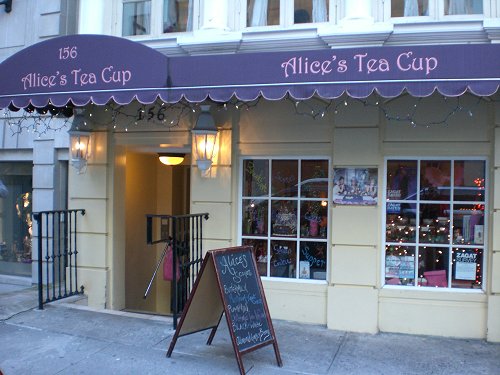 The unlikely location for our interview was the second “chapter” of a three-branch New York City-based business named Alice’s Tea Cup. I say unlikely because here was a grown woman and an almost-30 year-old British man having brunch in a place themed around Alice in Wonderland that caters for very young girls who get to wear fairy wings at the table and get a sprinkling of “pixie dust” when they leave.

No, I did not ask to be decked out in the wings, thank you very much.

Despite the fact the target audience for the place skews to girls still in the single-digit age bracket, Teresa and I were instantly made to feel at home by the very welcoming staff. There is a long wait for brunch on the weekends, but after killing a half hour over a cup of coffee at a nearby diner, Teresa got a phone call from Alice’s and we were ready to take our table.

Teresa is from Staten Island, New York, and her thick New Yorker’s accent came through from our first hello. When she speaks, it seems like she’s always about to break out in a smile and a chuckle, which makes her incredibly fun company to be around. 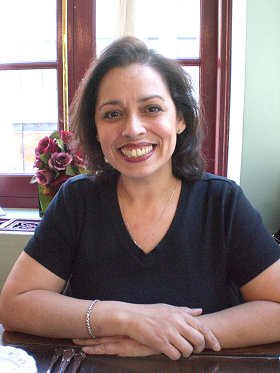 “I like people a lot, I like to talk. I’ve always been a chatterbox,” she said as we browsed the rather extensive menu at Alice’s, which offers high tea (scones, sandwiches, biscuits and tarts) and a truly overwhelming array of tea blends, and various other traditional lunch fare. Teresa’s natural ability as a conversationalist is one reason why none of her three jobs are desk jobs, she said, which makes sense because she appears to love interacting with people.

And, oh my, has she had her fair share of jobs over the years. We placed our order of the Mad Hatter afternoon tea — a good sampling of everything on offer — and then she ran through the abridged list of just some of her many past professions.

Teresa has been involved in sales for many years, including a stint at Friendly’s Ice Cream. Other jobs that have come and gone include bartending on Staten Island, selling computers, and managing a Blimpie’s sandwich shop. She event spent time working at the World Trade Center commodities exchange, but left after the first bombing at the place in 1993.

Now her life consists of three jobs: starting with an hour-and-a-half commute out to New Jersey she works at a UPS story taking care of “anything the boss doesn’t want to do.” It’s a job she loves because her best friend’s mother works alongside her, “so we can chit chat all day,” Teresa said. The other job that most people would call mainstream is one she recently got, at Costco stocking shelves early in the morning. Those two jobs alone leave her exhausted, she said.

However, she must have a secret reserve of energy because she still manages to do a third job, selling adult products through the Brown Bag Party Company. 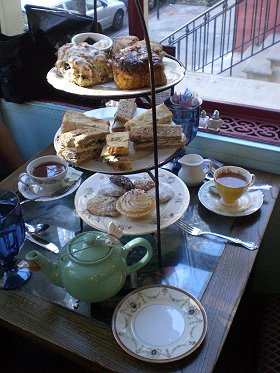 Our conversation, and indeed my view of Teresa, was interrupted by the arrival of our brunch. Alice’s afternoon tea is served up on a traditional three-tier stand, with the scones on top, sandwiches in the middle and then cookies and a lemon tart on the bottom.

When we ordered, I thought the $37 price tag between the two of us was a bit extreme for tea. But then one glance at the feast delivered to us was enough to put that thought to rest.

To accompany our food, we had ordered two different teas. I went for the Mauritius blend, described on Alice’s website as “broken tea leaves with a hint of vanilla and a strong tea taste from the island of Mauritius.” Teresa opted for a tea she tried before, the African Dew, a black tea with a “rich full bodied taste.” The website also says the tea can be a “great coffee substitute” and Teresa told me she loves coffee so much she just had to order that blend.

After a moment trying to figure out where to start, we dove in to the scones. Well, not literally, you understand, because they’d have to be freakish human-sized scones to jump into them. But we grabbed away and sampled one of each scone. 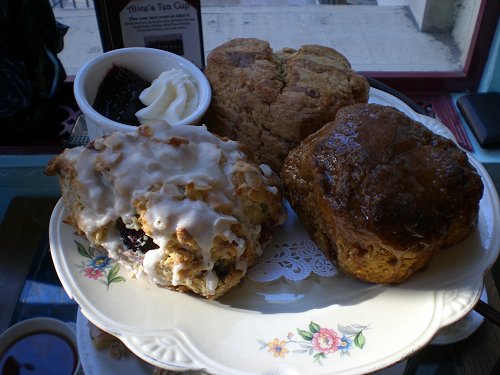 From the picture above, working clockwise, you can see a pumpkin scone, a tea-infused scone, and a berry scone with icing. There was also a small pot of cream and preserves.

All three scones were delicious, and for different reasons. Even though I’m not a huge fan of pumpkin I really enjoyed its subtle flavor and the soft, crumbly texture. The tea-infused scone was I think my favorite of the day, covered in a fantastic caramel-ish glaze and sweet without being sickly. Yes, I know caramel-ish isn’t a real word, but please that one slip by unnoticed. The berry scone was tasty and the berries tasted fresh and juicy, but it was maybe a little on the sweet side and required a few gulps of tea to wash down. Still, Teresa and I agreed that all three scones were winners. They are also huge and we didn’t manage to finish any of them. 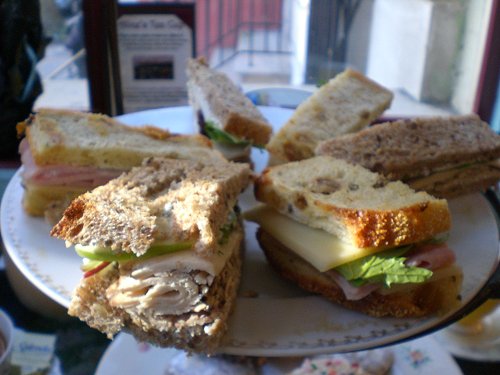 After resting for a few minutes, we poured ourselves another cup of tea and then moved on to the second tray, which held two types of sandwiches.

The sandwiches were both excellent, and I was surprised but pleased that the apples worked well with the chicken and cheese. Teresa agreed that the sandwich was delicious, and we also gave top marks to her selection of the ham and cheese sandwich. The serving sizes were also ideal because,as you can see from the picture above, Alice’s cuts the sandwiches into almost bite-size offerings. But sampling the scones and then the sandwiches was a lot of food between the two of us, so we decided to wait a while before attacking the tart and cookies.

Resting gave me time to keep prying into Teresa’s work as a romance consultant without the fear of spitting a stray bit of food or drink at her during my questioning.

Her daughter Jessica was the “guinea pig” for her first ever party, Teresa said, in order to help her get over her nerves about having never hosted such an event before. “They all loved the idea, it was a group of girls and gays, and it was easy” to be on tops sales form in front of a friendly crowd, she said. Confident after the trial run, Teresa started by recruiting friends for parties, and then they would recommend her to others, and the booking snowballed from there. She now hosts one to two parties a month, and will drive up to two hours from New York for an event. 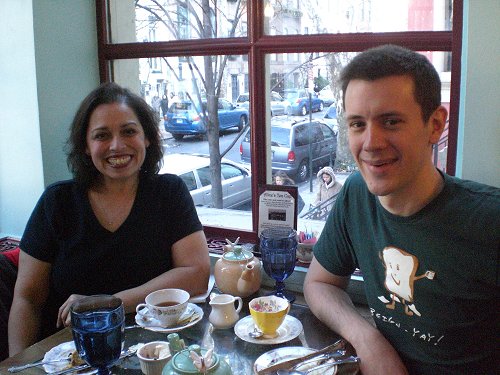 There is a wide range of the types of events she hosts, from divorce parties to birthday or bachelorette parties. “Usually I’ll try to embarrass the birthday girl or bride by giving her special things to wear” from the selections for sale, she said, chuckling.

Teresa’s very at ease in her own skin and I can see how she would have no embarrassment handling sex toys and other products that would make others blush.

She also seems incredibly comfortable with her sexuality and has even appeared on a national television talk show to argue what she calls a “pro-sex” position. Teresa also loves playing up the humorous side of her business at home, citing one time she came home twirling an 18-inch double dong above her head as she innocently said, “Hey, Jessica, look what I got!”

When she gets to a party, Teresa sets up a display table and then starts with a game to get people laughing and asking questions. Overall she said she gets a great reaction, and some groups of women have her “laughing from the moment I get there to the moment I like. Then it becomes more like hanging out with your friends.”

She said there has only been one “total dud” of a party where the women would not interact and sat there with stony expressions. On the bright side the party was very close to her current Bronx home. If she’d have had to travel a long distance for the event she might not have been so ambivalent about the unenthusiastic audience, she said.

So what does her family think of her profession? Teresa said she never had a discussion with her father about it “and I was fine with that” to avoid any awkwardness.

The only other incident from a family member was when her stepmother inquired into what it is that Teresa does for Brown Bag. The stepmother’s English is “so-so and my brother Eric proceeded in Spanish to give her the crudest, nastiest interpretation of what I do, complete with sound effects and motions. The poor woman’s face dropped 10 feet and all she said was ‘oh.’ She walked away and never brought it up again.” And that’s the extent of the family’s take on her job.

While the family has no problems with Teresa’s work as a romance consultant, don’t expect her daughter to follow in her footsteps. “She’d be too embarrassed to do this,” Teresa said. Jessica went to culinary school and now works at Alice’s. 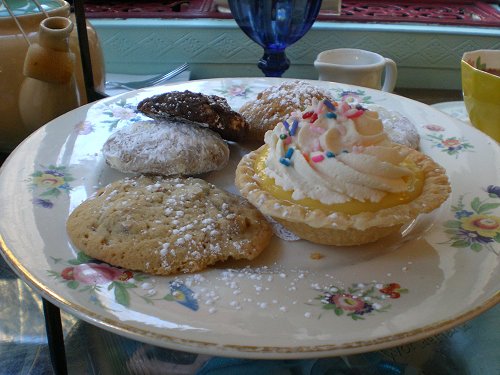 Now, you might think that her mum’s praise for the afternoon tea is based more in favoritism than truth. But I have no reason to play favorites and agreed with Teresa that the food was brilliant. As we finally found room to try the lemon tart and cookies, that thought was confirmed.

We split the French vervain-infused lemon tart and assorted cookies, and thoroughly enjoyed everything we tried. All together the two pots of tea and massive amount of food — there was so much Teresa took the ample leftovers home — are well worth the $37 price tag. Plus, Alice’s is a friendly, bright place that makes the tasty meal all the more appealing.

As I paid up and we got ready to leave, one last question popped to mind: what impact has the economic downturn had on her adult parties?

“We all need sex, we all like sex,” Teresa said. “It seems to be a recession-proof business.” Bear that in mind, dear reader, because if that’s the case then one of these days you may be opening the door to be greeted by Teresa wielding one of her toys and ready to entertain — and entertaining is something that seems to come naturally to her.