Winston e-mailed me to book a dinner and, happy as always to meet strangers, I organized a get-together for the last day of my recent holiday in California. Cognizant of the fact that I had to catch a flight back to Washington, DC, just hours after our slated dinner, Winston picked a restaurant in Culver City that was close to both his home and the airport.

One problem: I don’t drive and was in Pasadena, a good 30 minute drive away.

As Henry Jones Senior remarked in “Indiana Jones and the Last Crusade” when he found the trap door in the creepy German castle, “a solution presents itself!” Winston very kindly offered to pick me up, endure the hellish rush-hour Los Angeles freeway traffic, and get me to Culver City in time for our meal and to the airport in time for my flight.

Much like a certain fictitious New Orleans resident, I have always depended on the kindness of strangers. Winston did not let me down in this regard, and his generosity ferrying me about was testament to his friendly nature and apparent ease with someone he didn’t know. I tell this story not to provide you with extraneous information about my travels (though I just did), but to give an example of how Winston’s happy attitude probably helps him in life, including for his job as managing editor of Unzipped Media, a company that has a large Internet presence specializing in gay porn.

I casually dropped the magazines in my bag and forgot about them while we chatted non-stop until arriving at our dinner spot. From the outside it seemed unassuming. 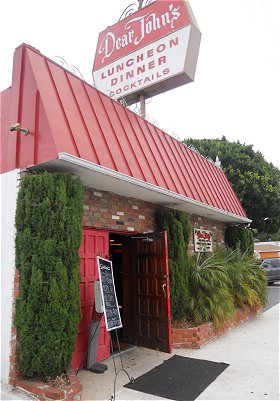 Inside it’s dark, with black walls, red leather booths and low lighting, and it’s lined with pictures of famous people called John. Above our booth was a picture of John Wayne.

The restaurant also looks like the place the mob might make a deal, or where decades ago Frank Sinatra and Cary Grant could have done shots at the bar. Winston said that Dear John’s is a local favorite of his, and indeed is often populated by 70-year-old Hollywood power types “drinking their twelfth martini and rocking the bar.”

Alas, no movie industry makers or shakers were there so I couldn’t pitch my terrible screenplay ideas to a random stranger. Instead we sat down to what Winston generously described as the “dulcet, intoxicating” tones of a Latin guitar player. His remark was said with tongue firmly in cheek, a trend I’d notice throughout dinner — the fellow has a dry, clever sense of humor.

We ordered some incredibly strong margaritas and perused the somewhat basic menu, and Winston gave me a mini-history of how he ended up in Los Angeles.

Winston, 39, grew up in the Midwest in a “medium-sized town.” He wanted to go the University of Iowa and study journalism because he had written all his life. Alas he didn’t get accepted so “I thought I’d do the most outlandish thing” and move to California. Relocating to Los Angeles was the last thing people in his hometown expected.

At age 18 Winston was in the City of Angeles. There were a few rough patches at first, including having to spend two weeks living in his car after fleeing his apartment due to undisclosed “unpleasant circumstances. It’s a good anecdote, bad reality.”

He soon enrolled in junior college for a year and then went to California State University, Northridge, to study screenwriting at the university’s film school. When it came time to pick a major, Winston noted that other students would pick film production, spend a ton of money, and in some instances not even finish their project. “I was incredibly lazy and I thought that if I became a screenwriting major, all I’d have to do is write a script,” he said.

He completed the script and got his degree, then starting in 1996 worked in television, writing for a few years on several series, and writing a movie for cable television.

That movie was “Romantic Comedy 101” and was written in 2001 for the E! Channel, which at the time was experimenting with producing scripted material. The movie starred Roseanne Barr’s ex Tom Arnold, and actors Joey Lawrence and Jeremy London. Winston told me that the latter performer has been in the news recently because he got sober after substance abuse and then claimed he was abducted and forced to take intoxicants again.

In 2006 Winston decided he’d had enough with his television writing career. “I didn’t really like anything about it except for the money, and the fact I could say I wrote for TV.”

He said the hours were rough, sometimes starting at nine in the morning and finishing at two the next morning. Another negative aspect of the job was “a lot of egos.” Getting writing gigs for television also necessitates a lot of schmoozing. “One thing I realized is that I’m not good at the hustle part, getting myself out there.”

Still, the money was decent enough to allow Winston to do some writing and then take several months off. After a while he realized this lifestyle was fun, but not necessarily smart.

“I’ve always been fascinated by pornography”

Trying to figure out what to do next, Winston turned to his husband John. The couple met on dating website match.com and have been together just under seven years, married for two. They tied the knot during the brief period when gay marriage was legal in California.

I was just outside of Hungerville at this point (seamless transition and terrible joke ahoy!) so I was pleased that our dinner arrived, served by a friendly and relatively attentive waiter.

Winston opted for the $13 beef dip, which was prime rib on a french roll with au jus. I didn’t try any of his food but he said he’s had the dish several times before and always enjoys it. Apparently the version that Dear John’s cooked up that night didn’t disappoint. 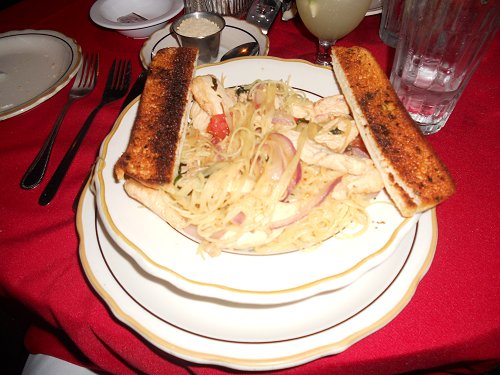 I went for the the $15 angel hair pasta with olive oil, basil, tomato, garlic and slices of chicken, and two massive slabs of garlic bread that could have been oars for a crude rowing boat. Unfortunately the garlic bread was overcooked, but the entree itself was delicious, the dish very moreish and also incredibly filling.

The arrival of the food usually lets me throw out the occasional question and stuff my face while the interviewee has to talk rather than eat. Winston managed to get in bites of his sandwich as he told me more about his current job.

Even so, there are still crazy stories and plenty of gossip, which Winston was again happy to wade into, though to protect against a potential libel lawsuit or two against this site his stories will have to remain off the record.

Winston said he doesn’t know how long he’ll stay at Unzipped but he’s happy there for now. But the one thing he always wants to be able to do is write, both professionally and not for pay. He’s already written two unpublished novels, and has ideas for more books and scripts in his head. Writing is “something I’ve always done, it’s always come naturally to me. I’ve always been very expressive and communicative. Early on people said I had a knack for it, and so I’ve just done it.”

He also enjoys singing, something that was evident from his first e-mail to me booking a dinner with a stranger. Winston sent over two YouTube links to his singing — one performing the American national anthem at a baseball park, the other singing a self-made mashup of 70s songs at a friends’ wedding. Much like writing, he said singing is something he has always done.

“I just love to sing and will do it any opportunity I get.” But he doesn’t see a long-term career out of his singing. “I don’t think there’s a market for what I would like to do. Not a lot of people out there are buying fucked up renditions of showtunes and medleys of 70s songs.”

Overall it seems that Winston’s move to California was the right decision for him. He’s happily married, writing for a living, covering an industry he’s genuinely interested in, and still has time to indulge his love for singing. No wonder he seems so at ease with himself.

Conversation was so easy with Winston I would have liked to have kept on talking, but it was time to head back to DC. After dinner Winston drove me to the airport. I thanked him for a fun dinner, and went to board my flight.

I needn’t have worried. The security agents showed nothing but indifference.

I had a gay old time.