#15 They Call Him Mister Fry

This interview was a bit unusual.

Sure, there’s always something awkward and not quite ordinary about meeting a total stranger for dinner and then picking their brains about their entire life history. But one cold and rainy Saturday night in New York City I stepped it up a level by first going to watch stranger Jack Freiberger act in a one-man, self-written true story show based on his career as a teacher in California. 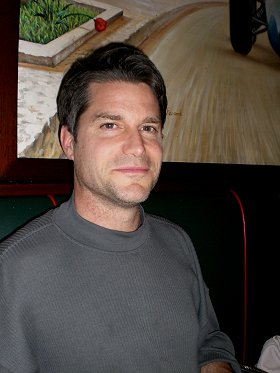 For the next few weeks Jack is performing his show “They Call Me Mister Fry” at the Comic Strip Live in Manhattan. We’d made plans to have dinner after the show that night, which I bought a ticket to see. Because it’s a tell-all and based entirely on true events in his life, by the time Jack took his curtain call I felt like I had already learned a lot about him.

To appropriate what I understand is one of Martha Stewart’s favorite sayings, that’s a good thing, because on stage and off Jack is a friendly, easygoing guy who clearly has a strong personal investment in making teaching the most rewarding experience he can, both for his students (who are typically between the ages of 10 and 11) and himself.

After the show Jack unwound with a quick post-performance drink at the Comic Strip Live, where we made small talk, and then we stepped out into the chilly evening — have I expressed enough how miserable the weather was that night? — to get dinner.

Jack suggested Tony’s DiNapoli, an Italian restaurant a few steps from the comedy club and a place he’d eaten at before. They serve their food family style, which means unless you’re either an incredibly greedy person or very hungry (or both) then several people can easily share one dish and there will still be leftovers. All I’d had to eat that day was a fruit and nut cereal bar and some gum, so I was more than willing to indulge my inner fat kid and tuck in to a big meal.

We placed our order and then I asked Jack one question that came up during the show: how come he was performing on a small stage in a comedy club rather than a theatre? And yes, American readers, I’m using the English spelling of theatre. Go England!

Jack explained that the Comic Strip Live — which he described as one of the longest running and “most successful comedy clubs in the country and always on the forefront of new and innovative ideas” — is introducing theatre in addition to its regular agenda of stand-up comedians. To do this, the venue is bringing in the top one or two person plays in the country, and the club got in touch with Jack to bring his show there as the first theatre production. I’m sure the rave reviews and good word of mouth posted on the website for “They Call Me Mister Fry” helped.

It’s obvious from the way Jack smiled when talking about being the first theatre act at the Comic Strip Live that he’s incredibly proud of leading the charge. But let’s step back for a second and look at where he started, and how he came to be sitting with a random British man at a table in an Italian restaurant somewhere in the Upper East Side of Manhattan.

He was born and raised in Indianapolis, Indiana, and went to private school all the way through to graduation. His parents instilled in him from a young age the importance of a good education. “Even today my dad is still correcting my grammar,” he said, and it’s one answer for what he said is a “multi-faceted” response to a question on why he likes teaching.

After going to college in Texas, where he did some acting, Jack moved to California — he currently lives in Santa Monica and loves his location — to pursue acting, but all the while still having a “strong feeling to be a teacher.”

In between acting parts he would indulge in his interest in the teaching profession by working as a substitute. After a while it became the “next logical step” to take teaching full-time and give a backseat to the acting, he said. He wasn’t doing as much work in acting as he wanted to, so his plan B to become a teacher quickly became his plan A.

It was during his first year teaching a fifth grade class in South Central Los Angeles that the initial idea for his play came about, based off the stories of some of his pupils. “When I started doing it, I go, ‘Wow, these stories are pretty intense. They should be heard.”

I wanted to learn more, but we were sidetracked by the arrival of our starter, a tomato and mozzarella salad that looked like a main course. 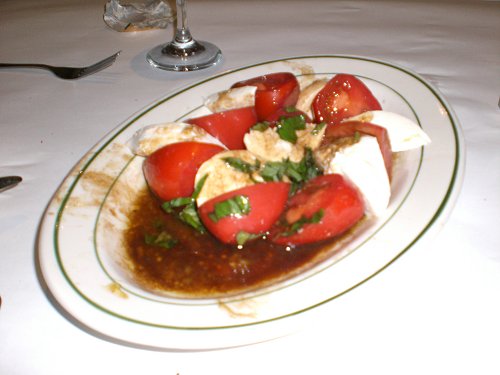 As you can see from the picture above (taken after we’d already dug in) the “salad” part of the dish name was not really fulfilled. But the two main ingredients were coated in a tangy and delicious vinaigrette. However, the $16.95 price for the starter seemed just slightly on the steep side however for what was really just a bunch of chopped up tomatoes and wedges of mozzarella drizzled in dressing. Still, it was tasty.

But enough about a simple salad, and more about Jack’s transition from actor to teacher to something that straddles both careers.

After a while Jack realized there was a narrative emerging from his experiences adjusting to life as a teacher in South Central but also from two of his students, who in the play go by the names of Anthony and Jasmine. As the show’s website says, “it’s a coming of age story not only for the students, but for the teacher as well.”

It’s tricky to tell more about Jack’s experiences teaching without ruining the play. Because I had a great time watching his solo performance and thoroughly enjoyed “They Call Me Mister Fry” I’m going to avoid getting into further specifics about what happens between Jack — who abbreviated his surname Freiberger to Fry for the classroom — and his students. But at its simplest the show is an expression of another reason why Jack loves teaching. “I love watching the growth of students and seeing them improve. My story is not just about my personal growth but also about the growth of Anthony and Jasmine,” he said.

Jack has already traveled across the country with his show, which he started performing in January 2001. He works four months on as a teacher and takes two off with his show. “The school is very flexible,” according to Jack. But what do the students think? “They love it,” he said, adding that he’s become pretty established at the South Central school.

While he’s in Manhattan it’s obviously an off month, and Jack said he is enjoying being in New York. Our dinner at Tony’s was also not the first time he had eaten at the restaurant, and he recommended for our main course that we get the cheese ravioli. 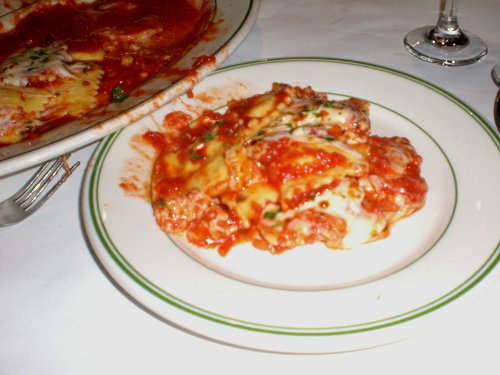 Wow. It was a lot of pasta and cheese. The Ravioli di Napoli $18.95 was stacked so high and wide it was practically falling off the plate when it arrived. Once again we started to eat before I remembered that I put pictures of the food on this site, which explains the rushed shot above. Regardless, the pasta was melt-in-the-mouth soft and the cheese and sauce were both outstanding. It was a fantastic main course that was worth every penny.

Trying to avoid spitting remnants of ravioli at Jack, I continued to pepper him with questions about the teacher/actor balance, and I believe he’s truly found that sweet spot where he’s dedicating good amounts of time to both professions with different, but equally satisfying rewards. He’d already mentioned that he wasn’t working in acting as much as he wanted — though he also said he loves performing, which includes being at the front of the class. But is there anything about teaching he doesn’t like?

“I’m not a real fan of the atmosphere that’s created for teachers now. The teachers today are completely micro-managed, and I try to make that point in the play. When I started teaching, the teachers were allowed to do what they could do, as long as they hit certain benchmarks and at certain times, and you could pretty much be creative in how you taught. But now you have to teach by like step, speak-and-spell method, now you’re a robot. You’ve got to teach this, you’ve got to say that. It’s taken a lot of the fun and the joy out of teaching, and the creativity out of it.”

Nowadays, Jack said teachers “spend more time writing in your notebook and coming up with lesson plans” than being able to devote oneself entirely to teaching.

“It’s too bad because it used to be teachers gave 100 percent and they expected the students to give 100 percent. They don’t put any requirements on the students now, if the students don’t do well, it’s the teacher’s fault, it’s not the student’s fault. It’s an anti-teacher movement, I think, that’s going around,” Jack argued. The federal government’s No Child Left Behind policy also gets criticism in the show for its regimented, uniform approach to teaching that Jack said serves to the detriment of teachers’ creativity in the classroom.

This was exactly when dessert arrived, interrupting Jack’s train of thought. “I was on a roll,” he quipped with a grin, then seemed willing to move on to happier topics while we tucked into our final dish of the night, a monstrous strawberry shortcake. 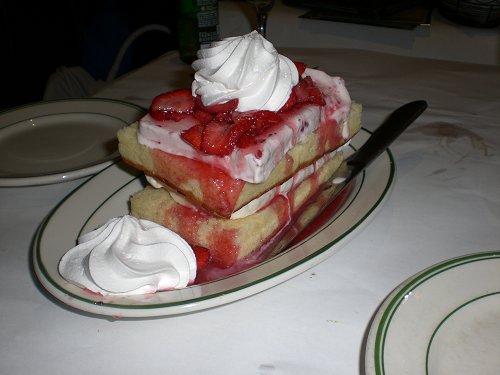 What a behemoth. Ice cream, pound cake, more ice cream, more cake, cream, and strawberries. “Hey, it’s got to be healthy, it’s got strawberries in it,” Jack said. For $14 this was a very generous amount of pudding, and perhaps the best course of the night. The cake was moist, the ice cream delicious and the whole thing just incredibly moreish. On a previous visit Jack had tried the shortcake before and he said, “I’ve been fantasizing about eating this all week.”

That brought our meal to an end, which was good news for my waistline. To wrap up, I asked Jack what his goal is with performing the one-man play? “I hope my show will help people realize not to forget the teacher’s story,” Jack said.

However, you can take it from me — I’m trustworthy, honest — that you don’t need to be a teacher to enjoy Jack’s show. “It’s appeals to a wide audience. It’s not like ‘The Godfather’ only appeals to mobsters.”

Jack said he’s committed to making the show the best he can, already clearing more than 130 rewrites — though not all are page one rewrites. “I’m always striving to make it as good as possible and make that ultimate dramatic American classic that makes you laugh and makes you cry, and you don’t just forget about it when you leave the theatre.”

Yes, I know Jack would likely correct my poor use of “and” to start a sentence. But he’s not the kind of person who would bring that up — at least, he didn’t seem that like during dinner. Maybe it’s the performer in him, but he has a natural ease with other people and not just in the spotlight of an interview. Even watching him speaking with the staff at the Comic Strip Live and Tony’s it was obvious he is a considerate and open individual, and quick to laugh and smile. He’s also very inquisitive, almost asking me as many questions during our dinner together as I did to him.

If the story in Jack’s show and the time I spent with him are any testament, his students are very lucky to be able to call their teacher Mr. Fry.