His dining companions laughed just as loud. Zydeco dancer Mary Burns and cover band member Buzzy “Beano” Langford knew exactly what Brobson and the cartoonist were getting at. One decade after Katrina, local, national and international media has deluged the city in a different way, with seemingly endless pieces about “K10,” the hurricane’s 10-year anniversary.

Lifelong New Orleanians are tired of talking about “the storm,” regardless of whether that’s referencing Katrina or the devastation of Hurricane Betsy in 1965.

That doesn’t mean they don’t still have thoughts about the good and the bad 10 years since Katrina made landfall August 29 and then the levees broke, washing away huge chunks of the city (particularly the poorer neighborhoods). During a nearly two-hour lunch at Antoine’s — a French Quarter fine dining restaurant that’s been operating since 1840 — all three residents said that they wanted to share those thoughts, often doing so with a macabre sense of humor. 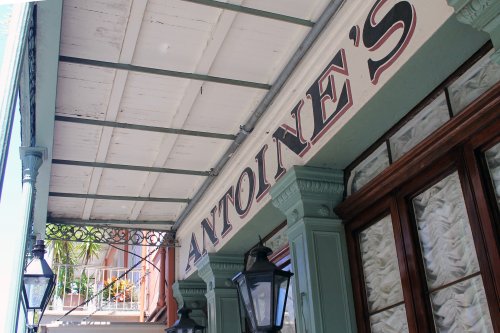 Mary, an incredibly energetic 68-year-old who proudly wore a silver necklace shaped like Louisiana, hushed the room as she threw her own joke out.

One day recently she was performing in a community theater play — one of her hobbies. Her character had to deliver the lifeless line, “Would you like a drink?” to someone else. Instead, she improvised. “I said, ‘Would you like a drink, or . . .’ and then I see him really sweating, looking at me like what the hell am I doing, ‘. . . or, would you like my special? It’s the Betsy-Katrina double-punch. You drink it now and it wipes you out again in 40 years!”

Again the three locals burst into hearty laughter. There’s a hint of residual sadness behind their Katrina jokes, but this was a group ready to talk without getting maudlin.

Although this site is called Dining With Strangers, I’ll have to ask for a waiver from the title for this two-part piece because the people I met with aren’t strangers.

They’ve all been featured before here. They agreed to reunite with me — and meet each other — for a lunch roundtable in one of the elaborately decorated private dining rooms of Antoine’s restaurant. The Escargot Room is a beautiful wood-paneled chamber with a single line etched into the walls to look like the trail of slug from a snail, culminating in a massive picture of the mollusk. 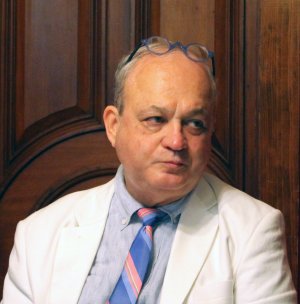 Brobson’s close connections throughout his many years in the French Quarter helped secure the room, a great lunch menu, and flawless wait service. He stayed in the city during the storm and used his medical expertize to help with much-needed medical work in the immediate aftermath. He shared his story over a meal at Galatoire’s last October. 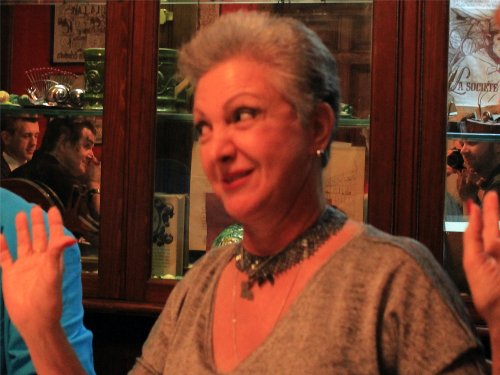 Born and raised in New Orleans, Mary has had a colorful life first as a Catholic middle school teacher in the city and now in her later years as a zydeco dance teacher. We first met on the dance floor of a zydeco club on Frenchman Street, then got lunch in May last year at Deanie’s Seafood in Bucktown. 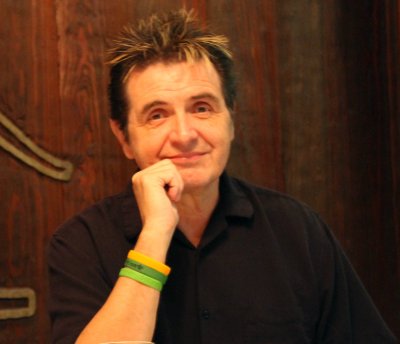 I met the third stranger, Buzzy, 62, way back in August 2009 at the fantastic restaurant Bayona. Buzzy is a member of the cover band The Topcats that plays gigs in and around the city and elsewhere, and has been a New Orleanian all of his life.

“It’s been a long time since I was alone in a room with this many men!” shouted Mary, laughing. She’s brimming with energy, a constantly joyful presence with a quick wit and an accent dipped in cafe au lait that pronounces “New Orleans” with a drawl something like “Nawlins.” Looking at her male dining companions, she said with a wink, “I can handle it, as long as they don’t upstage me.”

Although I’ve long since learned that it’s near-impossible to upstage Mary, I think she met her match in 67-year-old Brobson. Despite being born in another state, he’s developed an accent to rival Mary’s, twisting words so that when either Mary or Brobson say my name it changes from the British pronunciation of “An-ton-ee” to “Ant-knee” — something that would cause a ruckus when we got to dessert at Antoine’s. 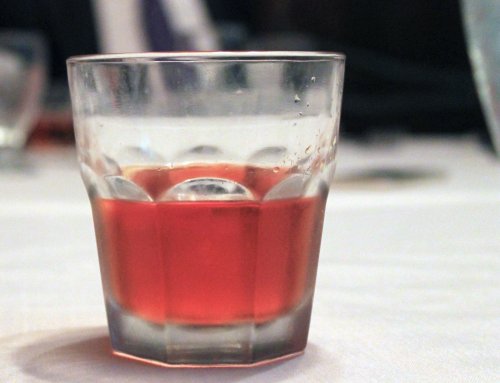 Before that could happened we each ordered cocktails to start, sipping on some of the best-made drinks in the Quarter and munching on the restaurant’s warm, crusty, perfect French bread loaves. These American football-sized pieces of baked dough work perfectly to snack on in a fine dining place like Antonie’s. But the restaurant’s versions are so good that you could have a local take-out place slather them in seafood and all the trimmings of a po-boy, the signature Big Easy sandwich.

In the years since Katrina the city’s restaurant scene has gone from great to beyond superlatives, a fact that many news organizations noted for K10 and that city restaurant critic Tom Fitzmorris already had uncovered when we had dinner back in August 2013. Unfortunately, Tom couldn’t make it to the 10 year anniversary roundtable.

Now, this isn’t a glowing piece about the way that tourism has rebounded over the years or how the restaurant scene — long one of the city’s biggest draws — is arguably at its strongest in a long time. Nor is this a grim article dwelling on the horrors of the disaster and what locals will tell you has gone wrong in its wake like the lack of investment in the poorer wards or the rising crime rate.

This interview is neither of those things. It’s people who live in and love New Orleans talking about what happened to their city, and where things are 10 years later. 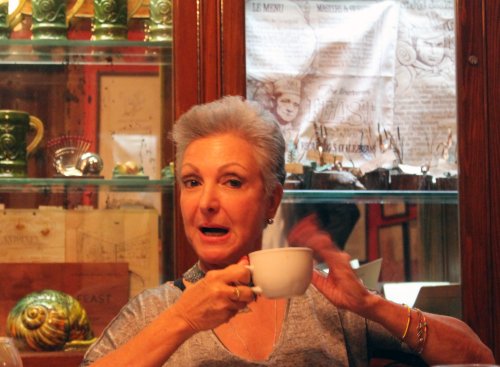 “I think the city has been neutralized,” said Mary, cradling a sangria.

“A lot of what makes us who we are, our truth, our essence, has been neutralized. The water washed it away. We’re now like a big box city, it’s an illusion, they decoupage the front to make it look like New Orleans,” she said.

Brobson nodded. “I know exactly what she means,” he said, reminding the rest of us about how communities that were once home to some of the city’s most important neighborhoods have been wiped out. “St. Bernad Parish was totally disrupted, so was the Lower Ninth Ward. Less than half the people from those neighborhoods are back, but they really gave New Orleans its character.”

Even just a drive round the city can throw Buzzy for a loop.

Staring forward at his iced tea, he told how many of the neighborhoods where houses were destroyed either during or after Katrina have been rebuilt into something strange-looking. They’re modern, they’re fancy, but they’re just not New Orleans, he said. “It’s not all bad, because it means progress is happening. But everything just looks so different. I was born here, I grew up here, and it’s crazy how much our landscape has changed,” Buzzy said. 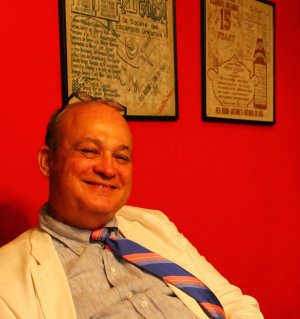 The trio then traded stories about the level of property damage they suffered during Katrina, and the fact that their homes escaped relatively unscathed. Others weren’t so lucky, with their homes swamped after the levees broke. Buzzy said that he wouldn’t trust living outside the city’s floodgates these days, and that made Mary sit bolt upright, leaning in to the table, her smile gone.

“I don’t trust all this new floodgate business,” she said.

Hasn’t the federal government made the levees stronger then ever since the storm?

“They were supposed to be strong before!” Mary countered. “I just don’t trust them. I’ve kept my flood insurance. I even think they blew up the levees.”

Brobson leaned back in his chair. “This time?”

“Any time!” Mary shot back. “I believe they’d blow it up Thursday night if they could.”

The doctor shrugged doubtfully. “I don’t think they had the wherewithal to do anything this time. I think it just went,” he said. The conspiracy theory over whether the government deliberately blew the levees immediately after the storm still can hit a nerve. 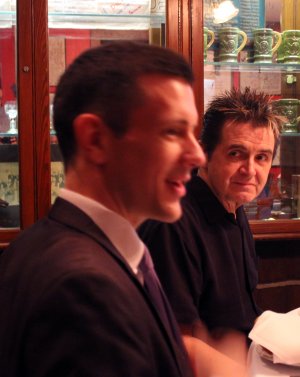 Redevelopment and the taming of the city also hits a nerve.

Buzzy’s comment about the strange new houses popping up across the city made Mary nod. She said, “I always laugh when I go over the Claiborne Bridge into the Lower Ninth now. Before Katrina I remember the rooftops looking a certain way. Now it looks like the side of a Colorado mountain with all these sloped roofs. The architecture and color is so foreign looking. That ain’t New Orleans baby.”

Though she welcomed the efforts by Brad Pitt’s Make It Right organization that built new homes in the city after the storm, she sighed, “Couldn’t you come up with something a little more New Orleans, darling?”

“But we’re still not Disneyland,” said Brobson, suggesting that the unique blend of revelry, humor, good eating and great music that is so very much New Orleans still exists — as well as some of the Quarter’s funky smells caused by who-knows-what. “The city is still not clean. It still has its odors that I appreciate,” he added with a wink to Mary, triggering a laugh that ricocheted around the room.

“Me too!” she said. “I was in Austin a while ago and I thought, ‘Now how come it doesn’t smell like urine?’ You spit there and they clean it up!” 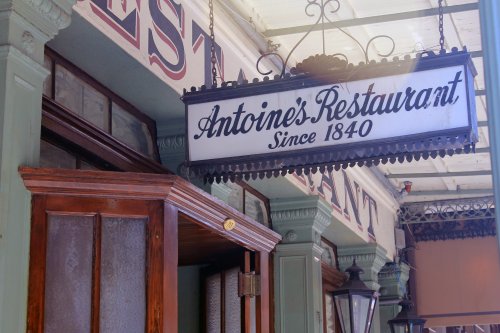 Has anything improved in the wake of the storm?

Brobson shot a look to Mary. “You think the schools are better?”

“I was just about to say that.”

Brobson paused as he reached for one of the several plates of souffle potatoes that were brought to us. These light, crispy double-fired potatoes are filled with air on the inside.

Perfectly seasoned, they’re laid out in a big pile next to a bowl of the restaurant’s fantastic Béarnaise sauce, which has just the right amount of tart flavor to it. Souffle potatoes are some of my favorite finger foods, so I copied Brobson in grabbing a few. 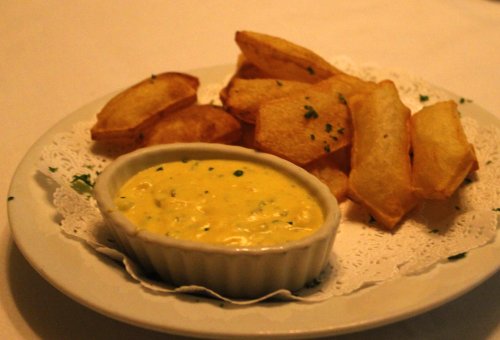 While we ate, he pondered the state of the city’s schools 10 years after Katrina. “I think we just switched one bad set of school administrators for another,” he said. “One thing that is interesting is that all the test scores are up. But if you’re at one of these new charter schools and the kid is disruptive or not right, they kick ’em out. So they’re not counted in the scores.”

“Everybody has a way to cook the books now,” said Mary.

Then our faultless waiter Charles appeared, flanked by his colleagues.

Click on this link to read part two of this interview.