#1 My Dinner With Joseph

Joe Matar isn’t a stranger to me.

Try and look past that — sorry for deceiving you with the site’s title! — and instead focus on the fact that this article is all about the creation of Dining With Strangers, rather than a true dinner with a stranger. Sure, we ate together, but I know Joe like I know something kind of familiar. Ish.

Happenstance (what does that even mean?) led me to be in New York City the weekend of November 14th and I thought it’d be good to catch up with Joe over dinner. My boss caught wind of the fact I was heading to the Big Apple, mostly because I told him I was going there, and recommended a couple of places: a fancy restaurant named Esca and a less fancy but still kind of trendy place named The Spotted Pig. The former was a bit classier than what I had in mind, so we went to the latter for brunch. 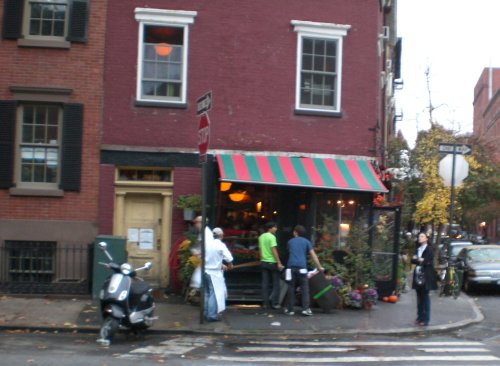 Allegedly, the chef at the place is British and the restaurant’s website boasts that it serves seasonal British and Italian cuisine. Sounded good to me. Further detective work to rival that of Jessica Fletcher revealed that the owners of the place are “April Bloomfield, Ken Friedman, and some pals,” according to the website. The menu also looked fairly intriguing and diverse, even if the brunch prices did veer to the steep side.

I know Joe from previous website tomfoolery and, I’m not too ashamed to admit, Internet chats. Okay, reading that sentence back, I am kind of ashamed. Apologies, world. 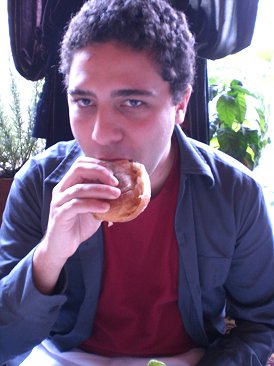 Joe’s an interesting fellow. Graduated from New York’s Hofstra University and then spent the last few months living in my home country of England. Thankfully, my fellow countrymen saw sense and kicked him out of the country and now he’s back in the United States.

At the moment, Joe is taking a course to learn to teach English as a foreign language to adults aged 20 and older, and from what he had to say it seems like a good class, though he says it doesn’t allow him to sleep ever, really.

To pass, Joe has to teach six hours total to some honest-to-God foreigners, three hours with a group of pre-intermediate English learners and three hours with an upper-intermediate group. In his own words, “the students are aware that they are getting taught by stupid amateurs,” and their incentive to come is the oh-so-princely sum of $30, which they pay when they sign up for the course.

Really, Joe says, it’s just to get them to come to class because the organization needs at least five people in class for it to count, and if the students have an 80 percent attendance record they get their money back at the end of the course.

I had a few glasses of white wine at The Spotted Pig, and my tape recorder cut out in places, so Joe helpfully wrote down his summary of the gig. “I’m pretty sure quite a lot of them have said fuck the money at this point, because the upper-intermediate course appears to be full of people who are basically like ‘I am just doing this to make my English better I don’t really NEEEED it'” Joe says. Apparently, the students barely show up anymore and Joe keeps having to steal two of the better students from the lower class to make up the numbers in the upper-intermediate class. What a system. 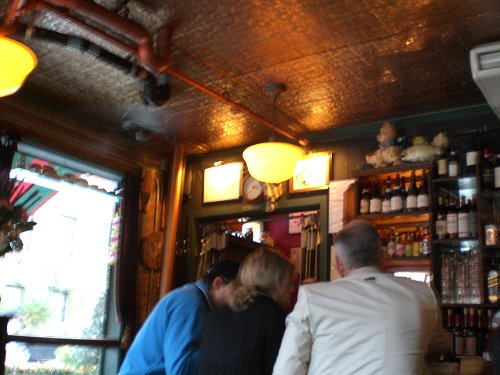 It felt a little odd interviewing him, seeing as I’m more used to crashing on his floor on visits to New York (at least, back in the day when he studied at Hofstra) or accompanying him and his rather generously-fed friends on rambles round Manhattan. Still, many things in my life seem odd, so I just accepted it and off we went to get brunch. Was the food as good an experience as the interview?

After what seemed like an unnecessarily long wait in the blustery wind outside The Spotted Pig, we were finally shown to our table.

Our uncomfortably small table jammed awkwardly — and very, very closely — next to two other tables. If privacy is your thing, this place isn’t for you.

The brunch menu has a nice variety of dishes to choose from, and I settled for the chargrilled burger with Roquefort cheese and shoestrings (I assumed shoestring fries, though it just said shoestrings, so there was always the risk of ending up with a boot component on my plate) while Joe ordered the Cubano sandwich with mixed salad. Our choices each cost $15, though Joe’s cryptically said to allow 15 full minutes for preparation for whatever reason.

While we waited for our food, I brought up the idea of Dining With Strangers. I travel a fair amount for work and pleasure, and usually end up dining alone on the evenings. I thought it would be an interesting idea to invite random strangers to dinner, and find out all about their impressive life story or quirk or product they’re pushing. Whatever. They could be minor celebrities, or they could be like Joe — a big celebrity in his own house. Articles for the site would be half interview, half restaurant review (a backup in case the people are deadly dull). What did my companion have to say about this? Let’s just quote him directly. “I can’t think of another good idea that is as good as this idea,” he said.

Thanks, Joe. After getting diverted with a conversation lamenting the state of Saturday Night Live -– which is only really funny when it’s doing political sketches — he asked me where I got the idea. My best response was that, like Ray Stantz in Ghostbusters when he thinks of the Stay Puft Marshmallow Man, the idea “just popped in there.”

Thankfully, unlike Stantz’s thought, my idea didn’t take the shape of a joyful mallow sailor intent on destroying Manhattan. 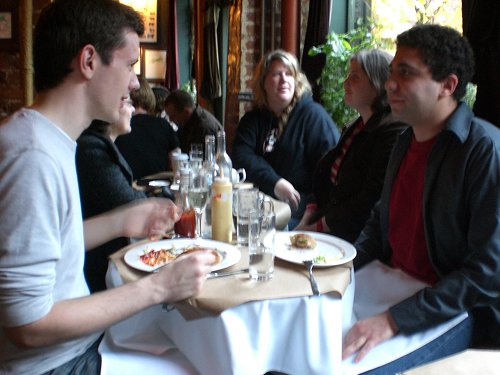 Polishing off my first glass of white wine, I choked slightly as Joe raised a salient warning about the site, saying, “I think you’re going to get a lot of hobos using the free library Internet” wanting to sign up for a dinner. And yes, I know that white wine and red meat don’t mix. And yes, I know that starting a sentence with “and” is poor grammar. You’ll just have to love me despite my faults. Anyway, on to Joe’s warning.

Anthony: That won’t happen. People wanting a dinner need to have a cellphone.

Joe: What if the hobos use a payphone?

Anthony: I’ll know from the sound of constant traffic in the background.

Anthony: If I get to the restaurant and see someone like Fagin outside I will run away screaming.

Joe: The hobos will ask “how much can I order? Is there going to be a buffet?”

Anthony: I don’t think I’ll get a lot of hobos.

Joe: They’ve got lots to say. They’re always talking. Even when there’s no-one around.

Ever the bright spark, Joe also raised another good point about the site. “How can you ask interesting people to dinner when you’re not interesting?” Clutching my sides because they were splitting from laughing so hard, I told him that’s the point — I’m not the story, the dining companion is. I’m a sponge. An info-sponge, if you will.

At last, the food arrived. Perfect timing really, considering the idea for the site had finally taken some loose shape. The burger looked pretty good, and thankfully it was indeed served with shoestring fries, not actual shoestrings. 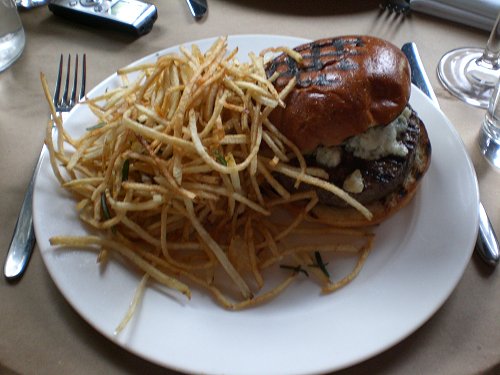 The taste? Okay. The meat was a little undercooked. I asked for medium, and this was closer to medium rare. Still, the burger was of a good quality and the bun was well toasted. The fries were a little soggy though, and the Roquefort cheese was an odd choice. I kept trying to work out whether the cheese made the burger taste overly-salty or overly-beefy. Perhaps it tasted like the ocean. Like a beefy ocean. As a pub burger it was fine, but probably not worth $15. 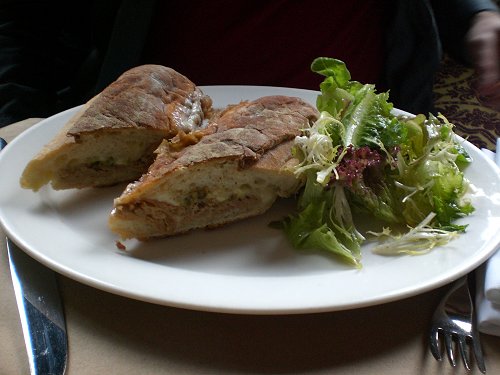 Unfortunately for The Spotted Pig, it was a somewhat similar story with Joe’s sandwich. It looked great, but then he started eating. The salad, as Joe effortlessly put it, “was stupid and tasted like someone opened a shaker of salt and poured it directly on it.” He did like the jalapeño peppers stuffed inside the sandwich, but he also raised a good point when he wondered what exactly took an extra 15 minutes to prepare something so simple.

We skipped dessert, as we were both full (at least the portions are generous). Overall the restaurant was a bit of a letdown especially considering how popular it seems to be.

The tables really are uncomfortably close to one another, so much that at some points it was like dining with the people next to us. You know, strangers. Like dining with strangers. Hmm, that gives me an idea. On balance, while The Spotted Pig has a funky décor and a busy atmosphere, I can’t recommend it when there’s so many other, better brunch options in New York.

I hate to admit Joe is right, but his whiny summary hit the proverbial nail on the proverbial fat head. “I don’t want to wait, and it costs quite a bit too. Nothing that we were served was bad except the salad but it seems to be more about the hype of the place and I don’t get what’s actually so good.”

Or, as he also put it, “It’s not about eating anymore, man. It’s about the scene.”

3 thoughts on “#1 My Dinner With Joseph”