#3 The Eager Beaver Diva With The Unconstricted Boa

If a picture tells 1,000 words, then the videos in this article tell significantly more.

I’m going to have to resist the temptation to just dump some YouTube links right here and skip writing anything up about my dinner with Margarita Pracatan, but that would be doing this eccentric, outgoing, wonderfully friendly woman a disservice. So, you get the written story first.

Due to various commitments, I knew I’d be traveling up to New York City for a weekend in December and I thought it would be a great time to organize another dinner with a stranger. With this site in its relative infancy I’m still doing most of the outreach for dinners, and I tried to think of people that could be interesting to interview while up in the Big Apple.

Recently, I’d bought a book by Australian television show host Clive James entitled Cultural Amnesia: Necessary Memories from History and the Arts. The weighty tome — a collection of short essays on key historical figures — is all well and good, but it got me thinking about the Clive James Show that aired on British television back in the mid-1990s. It was a mix of celebrity interviews and clips of bizarre people doing even stranger things. At the end of each show, Margarita Pracatan would appear to sing over the end credits.

Thing is, Margarita (by her own admission) doesn’t have what one would call a traditional singing voice. But there’s something about the energy and fun she puts into performing that makes her enjoyment utterly infectious. And that’s why I thought contacting this Cuban singer with the massive feather boa might be a good idea for this site.

After exchanging a few e-mails with Margarita’s daughter Maria, we set a place and date. So it was on one bitingly cold Saturday night in Manhattan I found myself walking through the doors of relatively-new Asian restaurant Fusha near the cross-streets of Amsterdam Avenue and West 75th Street, ready to meet the lady Clive James called “the eager beaver diva with the unconstricted boa.” 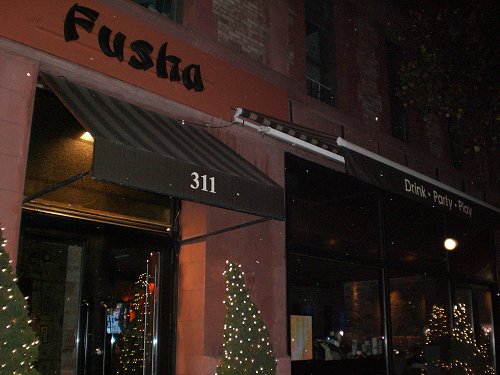 Despite trying for once to be early to a dinner date, Margarita was already sitting at the bar enjoying what she said was a tasty $10 martini. Alas, there was no feather boa in sight, but she was more than ready to enjoy herself as we were led to the table.

As we took our seats, I looked around Fusha, which my dinner companion said was one of several restaurants to hold the location in almost as many months. The atmosphere is pleasant without any obtrusive background music and was bustling even for a Saturday night.

The décor is minimalist, with some fancy artwork breaking up the otherwise dark tones and low lighting. Thankfully, we were seated near the window looking out on to the street, so we didn’t have to squint through the darkness to read the menu.

What a choice there was — and it explains why the menu weighs about the same as a small brick. Sushi, Asian-themed main courses and a host of other options mean you won’t struggle to find something. Margarita went for the classic sushi platter for $17, while I settled for the $12 Pad Thai with fettuccine. For a dinner drink, I was tempted by a peach “Fusharita,” which is really just the restaurant’s fancy name for a frozen margarita (and no, I didn’t pick it because I was dining with someone named Margarita).

While the combination of peach frozen margarita with Pad Thai may have been a trip into bizarre flavor country, the waiter strongly recommended the drink so I picked it. Between you and me, I think he was just trying to get me drunk so I’d tip well. Joke’s on him, I don’t have enough money to tip well!

“To live in New York you have to have money, baby”

While waiting for the food, Margarita cackled her infectious laugh — it’s impossible not to start smiling when she starts giggling — and launched into a monologue about her life. In fact, she jokingly ordered me not to interrupt with questions so she wouldn’t lose her train of thought. So, in fairness to Margarita, let’s jump straight into her bio.

Margarita was born in Cuba. As a young child she would look at magazines featuring pictures of classic New York City landmarks ranging from the Statue of Liberty to Fifth Avenue and the Empire State Building, and that was all it took to want to move to the United States, Manhattan in particular.

However, her family had other ideas and the Pracatans emigrated to Tampa, Florida. Nice enough place, Margarita said, but her heart was set on New York. When she was of sufficient age to strike out alone, she made the move to Manhattan and has lived in the same apartment near 74th Street and Amsterdam Avenue for what she says is a “long, long, long time.” How times have changed. The likes of Fusha and other fancy restaurants now line the streets of the neighborhood, and “to live here now you have to have money, baby,” Margarita beamed. Then she launched into something she’d do repeatedly throughout the night, a hilarious and unexpected yell of “ooh, a-ooh” over and over, the kind of thing you might hear repeatedly at a nightclub.

And that tenuous link lets me jump into telling you about Margarita’s life singing in clubs, bars, in the United States and overseas.

“My whole life I’ve always been happy and enjoyed singing to people,” Margarita said before one of her several reminders that she loved me “from the bottom of my heart,” but she never had professional piano or singing lessons. Instead, she created her own singing style which can definitely be called unique — examples in the videos below. “My English is not so good, the singing may be bad but people like it. Sometimes people like something different. I play by ear, my singing is fuggedaboutit,” Margarita said, her strong Cuban accent inflected with a few classic New Yorker phrases here and there.

To start with she would play for her family, learning her favorite songs entirely by ear. I used to play the piano (poorly) and I am impressed at Margarita’s ability to pick up the notes to songs, considering the best I could manage was to memorize the march from Raiders of the Lost Ark from a basic level music book. Anyway, as a child Margarita didn’t know what the word “entertain” meant, but she said she just likes to have a good time.

After several years of doing her thing in New York, roughly 15 years or so ago Margarita started doing a half hour show at 9.30pm every Saturday on Manhattan Neighborhood Network cable channel 56, and that’s what brought her to fame in England.

The producers of the Clive James Show saw Margarita’s half-hour — which is pretty much a solitary camera fixed on her as she sings a range of hits in her own special style — and invited her over to close our Clive’s show. That single run on British television in the mid-1990s pretty much sealed her popularity and, I can attest from speaking with friends and family back home, Margarita Pracatan remains a cult figure back in the UK (and in the United States). Her career snowballed from there, and nowadays in addition to her cable show and her official website she’s constantly traveling to locations including Spain and England to perform at parties, and just having a glorious time of her life living in her dream location of New York City.

I wanted to quiz her some more, but the food arrived (surprisingly quickly) and Margarita wanted to sit, eat and enjoy her time at the restaurant so off went the tape recorder. 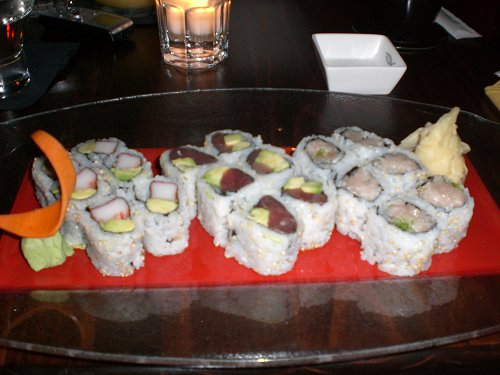 The sushi platter was, as the picture proves, a very generous portion. Margarita said the fish was delicious, and she struggled to finish it. While I didn’t sample her platter, it looked like it was more than worth the price and she had nothing but praise for the food. 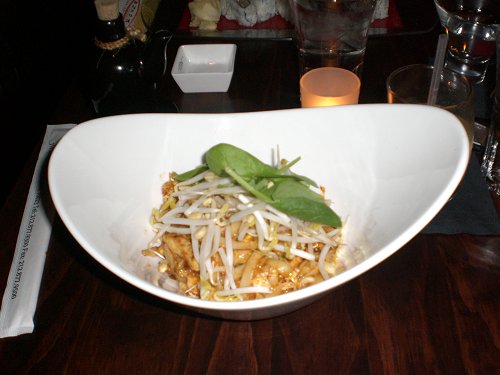 The Pad Thai fettuccine was similarly a large serving — too much for me to finish. Well, I have to look after my girlish figure after all. Ahem. But the sauce was very tasty and the pasta a perfect texture, dissolving in my mouth along with the finely-cooked chicken. You can also have shrimp or beef with the dish, but I think I made the right choice. Overall, the food was outstanding and I can highly recommend stopping by Fusha if you’re looking for Asian cuisine in New York.

We were both so full there was no room for dessert. I paid up and then Margarita suggested going back to her place to watch a television clip of her recent reunion with Clive James. I was more than happy to spend more time in her relentlessly joyous company, so after picking up some white wine as an after-dinner drink we headed to her apartment.

It’s a lovely place and it’s clear that over the years Margarita has designed it exactly to her liking. She quickly fired up a DVD of her appearance on British television earlier this year while I uncorked the wine. And sure enough, Clive James was being interviewed on a show about a new book he had out, with Margarita waiting in the wings as a surprise. Margarita burst onto the stage, the two embraced and as they talked it was clear they both still have a lot of affection for each other. 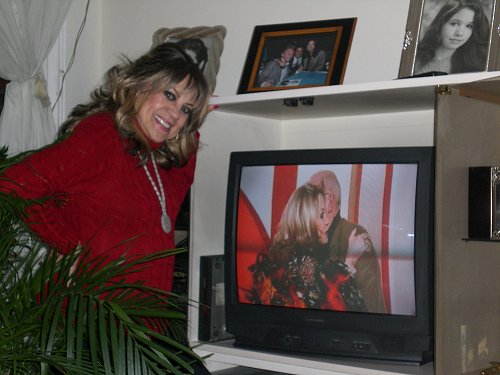 We sat and talked about all manner of things — Barack Obama’s election victory, England, favorite music, and a lot more that I won’t bore you with — before Margarita and I arrived at the conclusion that what we needed to do before the night was out would be to sing a few songs together.

So, within minutes, Margarita had her keyboard set up, and dragged out one of her most colorful feather boas for us to wear while we sang. What was the end result like? Judge for yourself (and prepare your ears) for our duet of the most appropriate song we could think of — New York, New York:

You can hardly hear me, and that’s deliberate. I let Margarita do most of the singing, because my singing voice is, well, atrocious. I’m okay with spoken word songs like the Monster Mash, but throw some variation in there and I’m lost. That didn’t stop Margarita from wanting to sing another though, and as you’ll see, we decided to perform an even longer hit. This time round, we opted for ABBA’s Take A Chance On Me: After a bit of a rest and a little more conversation, it was time for me to move on to other things I had lined up that night. But I’m extremely grateful to have had dinner with Margarita Pracatan. She is a rare woman, seemingly devoid of any cynicism and truly interested in just making the most of life and having a good time. Her contagious cheerfulness and unstoppable optimism make it impossible not to enjoy yourself when you’re in her company. Talking with her over dinner and at her place, I also found her to be an incredibly smart, well-educated and grounded person who has a host of interesting, fun stories to share. All in all, a great dinner.

As a special treat, Margarita insisted on playing Hello, which is perhaps the song she’s best known for. So, to play us out, here’s Margarita Pracatan with one last encore: