Despite working non-stop from dusk to dawn handling a career, college and children, Lynda Eselp is an amazingly cheery person with a simple outlook on life: “I don’t regret any of it.”

Lynda, 26, and I met up at AOC Bistro in Park Slope, Brooklyn, for a late-night dinner. Our first restaurant choice was noisy and there was a 30-minute wait, so after wandering the street for a while we settled on the French bistro, located on a street corner. It had outdoor seating which was ideal on the warm New York night, and the menu seemed generic but appealing.

A rather rude waitress showed us to our seats — my British birthright made me suspicious that maybe this was just centuries-old Gallic hatred of the English, but no, the place just has bad service — and then we tried to peruse the menus, but Lynda was keen to talk.

I don’t mean that in a snarky way. I was glad she was so talkative, and the conversation flowed effortlessly from the time we sat down to the end of dinner. It’s wonderful for an interviewer to meet someone who is completely at ease with themselves and just rattles off anecdotes, quips and jokes like a regular raconteur. Plus, any dinner companion that suggests getting drunk even before the waiter has brought out the bread and butter is all right in my book.

Okay, I don’t actually have a book as such, but if I did then rest assured Lynda would be in it. Hmm…what could I call the book? How about “The Wonderful, Whimsical World Of Breaking Bread With Random People”? Or maybe just “Dining With Strangers” would work. Hey, Simon & Schuster, book contract stat, please!

Getting back to the dinner, Lynda and I managed to find 10 seconds of downtime to pick our menu items. She opted for a club sandwich and water (she was driving) while I went for the sirloin steak a Cheval, which is ground meat topped with a sunny-side up egg and parsley mashed potatoes. The waitress took our order with an air of indifference that would have been insulting were it not so amusing, and then left. I tried to eat the bread, but it and the butter were ice-cold — who freezes butter and bread? — so I gave up and listened to Lynda’s life story. 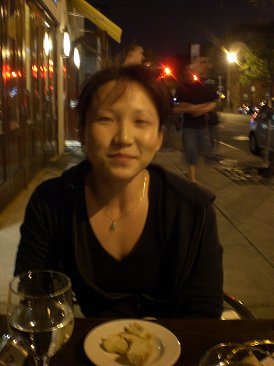 She was born in California in 1983, then after about a month in the Golden State her parents moved to the Bronx for roughly five years before they moved to a new place in Brooklyn’s Sunset Park, where her family has lived ever since.

Despite, or perhaps because of, spending almost her entire life in New York, don’t expect Lynda to wear one of those tourist t-shirts proclaiming “I Love New York”. Lynda said she has a different view of the Big Apple. “I really don’t like the people, the traffic, or anything about it other than my family.”

Dislike of the city was the primary motivator for Lynda joining the Navy at the age of 17. She liked her time in the Navy, but after several years of life at sea she settled down in New York with her children.

She currently works as an office manager for a media company and it suits her to a tee because she clearly loves being busy. Or, in her words, “I love it like a pig in shit.”

Lynda’s life right now is very busy. She misses the Navy, but is now in her last year of online courses at Kaplan University for a business management degree. She described her daily routine and I think the best way to communicate both her packed schedule and style of speech is simply to quote from the interview audio.

“My schedule is insane, I wake up at five in the morning, I go to the gym, once I get back I get the kids ready for school, I rush to work, everything about my life is rush rush rush rush rush, there’s never a moment where I just get to stroll — even in the way I talk, I speed talk because I feel like time is against me, I feel like I’ve got to say what I have to say now now now now now — so then I take the kids to school, rush to the train station, I stay on the train for an hour, I get off at Grand Central, I go to work from nine to five-thirty non stop, five-thirty I hop on the train, that takes an hour, then I’m home at six-thirty, I’m feeding the kids, I’m bathing the kids, I’m doing homework with them, I read them a bedtime story, nine o’clock to twelve o’clock I’m doing my coursework, then twelve o’clock I go to sleep, if I’m lucky I get four hours of sleep at night, that’s my day, every day for the past three years, it’s fucking exhausting.”

Lynda has roughly nine more months of school and she’s determined to graduate even if it solidifies her role as what she called “the black sheep” of the family. “It all goes back to my culture. Asian people aren’t meant to go to the military, you don’t move 3,000 miles away from your family, you just don’t do that. You go to college, get a job, live at home with mom and dad till you’re 50. But I was the one who wanted to be independent.”

This is the point at which her train of thought was quite interrupted by the waitress, who brought out our meal. 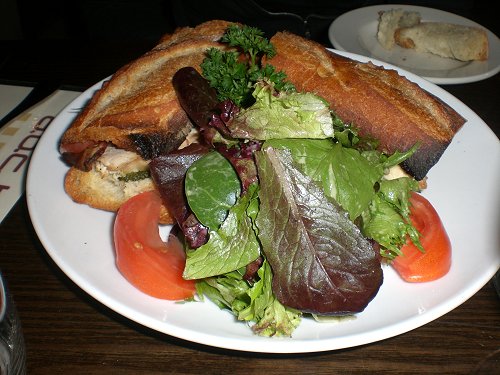 Lynda’s club sandwich looked delicious and filling, and she said it was worth the $9 price tag. However, we didn’t really spend a lot of time chatting about the quality of the food.

My steak — or more accurately sirloin burger — was well made and the parsley mashed potato was outstanding. The meal was pretty heavy and sat in my belly like a gym weight, though it was tasty and the potato, egg and steak was an unoriginal but tasty combination. It was also hard to argue with the $10 price tag for what was a large serving of food.

The total price tag for the two dinners, plus a $10 mojito I drank before dinner, came to $37.44 including tip. Not bad for a late-night meal for two in Brooklyn. Then it was time to hand over payment.

Unfortunately, AOC Bistro has a somewhat irritating policy of only accepting cash or American Express. I didn’t have enough dollar bills to cover dinner and I don’t carry American Express, so Lynda very kindly offered to use her American Express card to pay for dinner.

My dining companion more than adequately made up for the unfriendly service at the bistro. I enjoyed my evening with Lynda. As I said above, conversation flowed easily and she’s the kind of person one feels entirely comfortable talking with about anything. She’s also remarkably honest. “I don’t regret anything. I really mean it.”

Now, to leave you with something a little different, Lynda demanded that we make gangster poses for the camera. Below is the fruit of our one and only effort. Judge for yourself whether we were successful.

One thought on “#7 No Regrets”