Switching careers from being a clinical pharmacist to helping run her brother’s restaurant wasn’t something Kristal Williams planned, but she did it because of her strong belief in her sibling’s unique vision for selling a novel product: high quality fish in the form of burgers.

Forget any thought of McDonald’s Filet-O-Fish and a greasy fried patty quickly heated and slung between two sugary pieces of bread. Kristal and her brother Brandon are offering something else at their venue FishScale. They take top-grade, fresh-caught fish and make it into burger patties, cooking them over a wood grill. They serve the burgers with eye-catching sides including Japanese sweet potatoes and condiments made in-house. 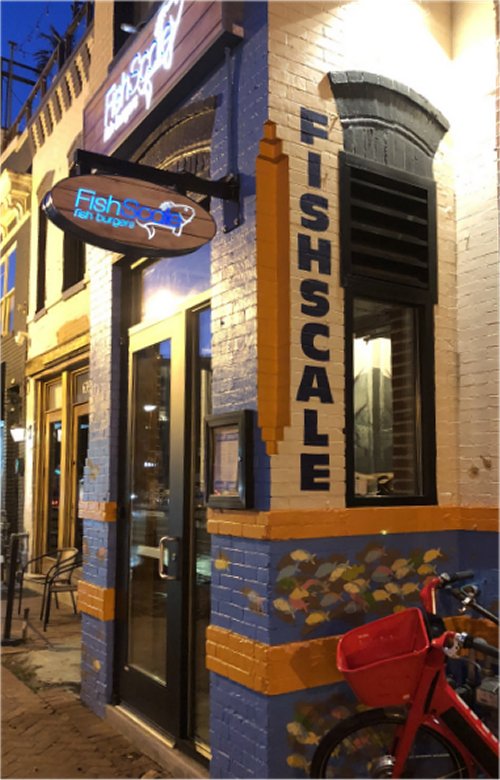 Some people might arch an eyebrow at the idea of a fish burger, others might wonder how a chef could possibly make something like a hamburger but with fish and keep it appetizing. As I sit down for a pre-dinner chat with Kristal at the restaurant, she laughs when I tell her this and says explaining their food is part of their daily work.

“People struggle with the idea of fish crafted into a burger because I think a lot of times they think about a fish sandwich, where it’s a filet. But ours is actually like ground fish crafted into a patty and then cooked on a wood-burning grill,” she says.

When newcomers walk through the doors of their small but brightly decorated location on Florida Avenue NW, Kristal stands ready at the counter to answer every question they might have — and she’s heard them all in the two years FishScale has been open. “We just tell them it’s a physical burger patty made out of fish; think of a hamburger, a turkey burger, this one is a fish burger. And I think that has sometimes helped people wrap their mind around it. And I then I walk people through our process.” 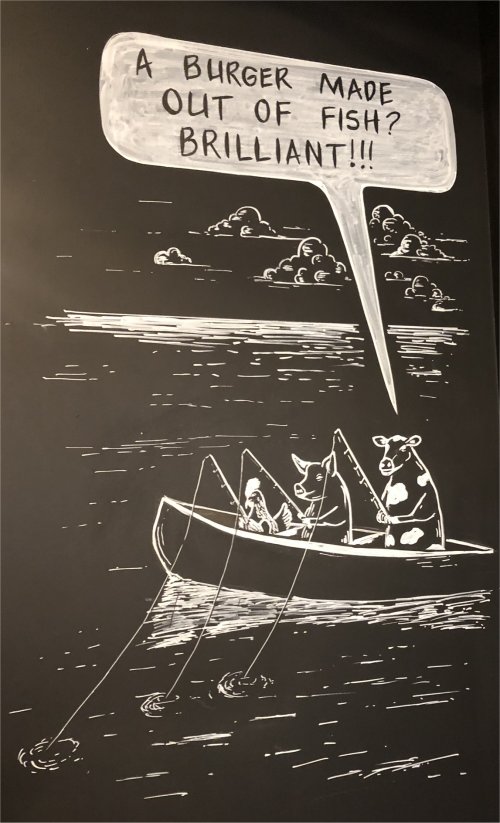 It’s an elaborate process. They get fresh fish in the morning, break it down themselves, and craft it into a patty but without any filler such as breadcrumbs, and then it’s cooked over a large grill that leaves Instagram-ready lines on the patties. Indeed, Kristal has an iPad of burger glamor shots at the counter ready to help educate first-time visitors. And her easygoing, friendly nature makes Kristal the ideal person to greet curious diners, as I witnessed seeing her interact with customers the night I was there.

On a typical day you’ll find Kristal manning the counter and welcoming customers while her brother Brandon does the grilling nearby. They celebrated FishScale’s two year anniversary in September and are optimistic about the future. And their unlikely food venture had its origins several years ago at a simple family cookout.

The Williams siblings were raised in a family that promoted healthy eating, and consumed minimal red meat growing up. Their mother eventually decided to become pescatarian after reading that it would have significant health benefits compared to a meat-heavy diet, and so growing up Kristal estimates that she and her brother had a diet that was about 85 percent fish and vegetables. “We believe in healthy eating.”

Several years ago the Williams family was holding a July 4th cookout, which doubled up as a birthday celebration for Kristal and Brandon’s mother. “My brother realized that there was nothing protein-based on the lineup for mom to eat,” Kristal tells me. “So he thought he could just make a fish burger. And he’s gifted and blessed with the ability to have food concept ideas in his dreams and just wakes up and tries it.” 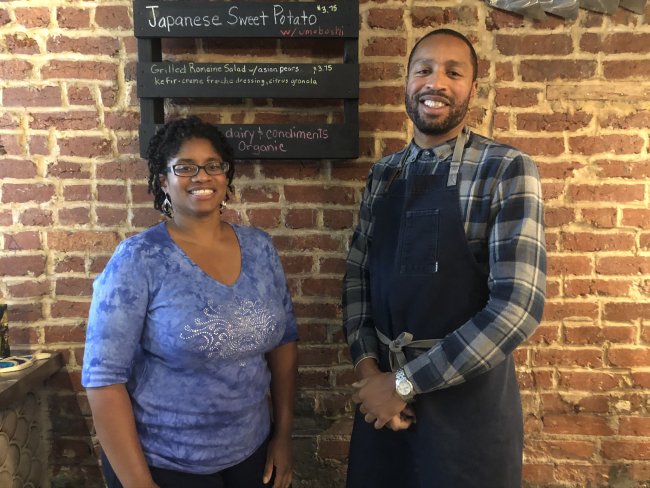 Brandon has an extensive culinary background, including studying at Maryland’s L’Academie de Cuisine and a stint working for DC’s BlackSalt Fish Market & Restaurant. As he and Kristal tell the story, the idea for making a fish burger instead of a grilling a whole fish at the cookout popped in to Brandon’s head and wouldn’t leave.

And so he made eight fish burgers as a trial run, making sure his mother would have something to eat. They were so popular and snatched up so quickly she almost didn’t get to try one. That’s when the Williams siblings knew they had something good.

In 2012, Brandon then won a coveted one-year slot at the Obama White House’s farmers market, where he sold the one-of-a-kind fish burgers. The runaway success at that stall, combined with the idea of being his own boss instead of a chef for someone else, convinced him to start looking for a home for his business.

“Finding a place was a little difficult just because the rents are so high,” says Kristal. “We knew that we wanted our first restaurant to be smaller in size, and everyone was trying to sell larger units. Obviously we wanted a location where there was going to be a residential homelife as well as a work life, and we love the Shaw area and the LeDroit Park area just because of the culture, the history and the arts.”

FishScale is located just a short distance from the Howard Theater that featured legendary black performers including Duke Ellington, Ella Fitzgerald, Sammy Davis, Jr., and many others, and the nearby U Street corridor, known as “Black Broadway” because of its history as a hub for African American culture and society.

“It just so happened that this place opened up,” Kristal says. “We had been scouting different areas out for about two years and once we found the location we just rolled with it,” and then launched the restaurant in September two years ago.

Prior to FishScale’s launch Kristal had been working as a clinical pharmacist, educating people on lifestyle modifications including dietary changes. Armed with that knowledge and a desire to help realize her brother’s dream she decided to quit that job and help make FishScale a success. “I did it for the love of my brother,” she says, and reiterates that she believes in the novel product he’s selling.

Eating at FishScale that night I can testify to Brandon’s ability to cook. 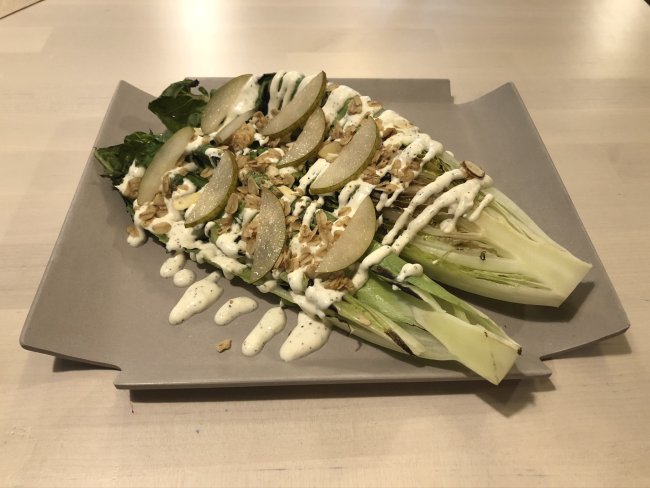 My meal starts with a grilled romaine salad, and Kristal explains that the lettuce doesn’t wither with the heat and instead gets a little smokiness from it. Brandon flash cooks the romaine on the grill, and tops it with a homemade dairy based salad dressing, topping it with a seasonal fruit (tonight it’s delicious sliced Asian pears and granola).

For the burger there’s a limited menu to choose from and that’s by design. The Williams siblings want their fish to all be fresh, sustainable and wild-caught and so they rely on a small number of distributors and farmers to supply such produce.

There are usually two featured burgers and the choices vary depending on whatever catch their suppliers bring in that day. For those visitors like me that can’t tell a haddock from a cod, funky chalk art by a local artist adorns the walls of the restaurant to display some of the rotating greatest hits of fish that Brandon likes to use: mahi mahi, speckled sea trout, pompano, Amberjack, sheepshead and redfish, among others. 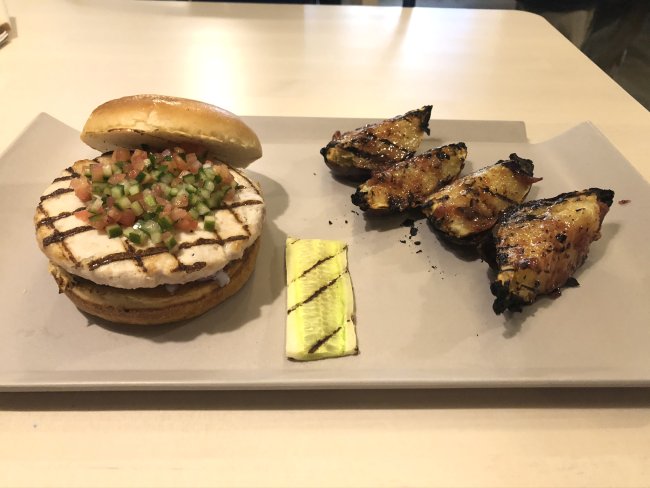 Tonight I’m trying the mahi mahi burger topped with a fresh relish of diced cucumbers and tomatoes, served alongside Japanese sweet potatoes with a plum puree.

“Pretty much everything is made in-house in small batches, with the exception of the buns which we get from a local all-natural baker,” Kristal says.

She describes the potato side as FishScale’s play on potato wedges; and I’d be happy to take this alternative any day. They’re melt in the mouth sweet, the puree drizzled across giving it an enticing sweetness that belies the side’s health benefits.

I get a rare chance to chat with Brandon in-between his duties in the kitchen, and quiz him on why he decided to go with grilling his food instead of frying.

“Oh that’s the best,” he says with a broad smile. “The fish and the grill just coalesce and go together, and that’s what I wanted to do. A lot of people actually would grill like that if it wasn’t such an onerous process. It’s a lot of money gone into it,” he says. 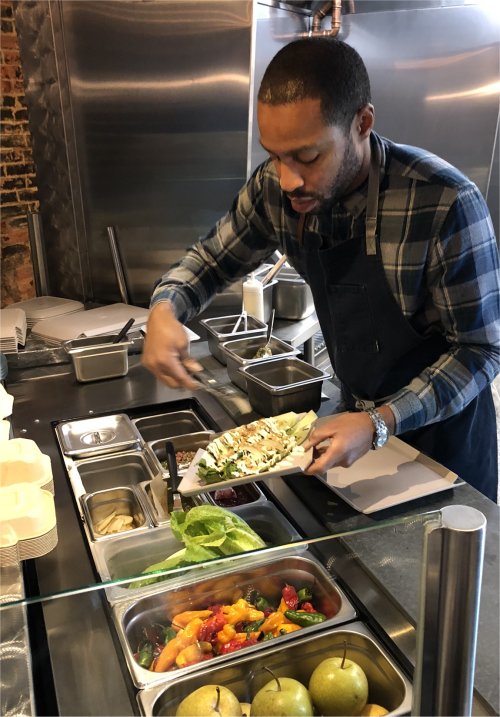 The result is a beautiful burger, the presentation with the grill marks and perfectly arranged relish on top makes it almost too pretty to bite into. When I do, there’s a satisfyingly meaty texture to the burger but with the prominent mouthwatering flavor of the fish, complimented by the light and refreshing tomatoes and cucumber.

“We wanted to select condiments that we knew would pair well with the different tastes of the fish,” explains Kristal. “Our primary goal is to never overpower the taste of the fish because we have some amazing fish that are right here in U.S. waters that most people don’t know about and their flavor is just outstanding.” 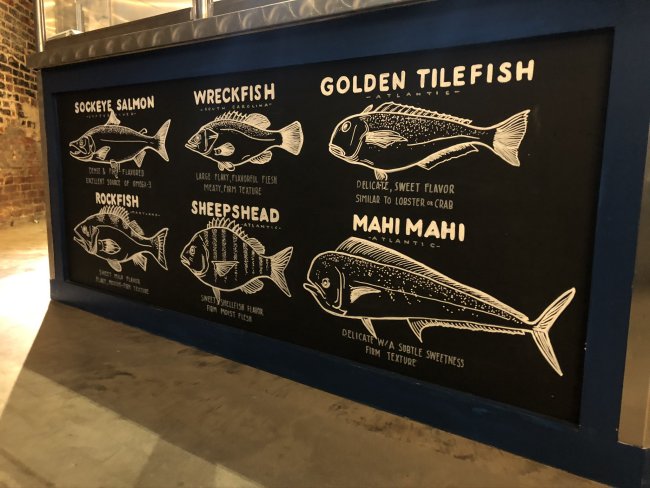 Looking around the relatively small, narrow restaurant with its bright color scheme and fun artwork, I ask Kristal whether an expansion might be on the horizon.

“We definitely plan on expanding, we hope to have multiple restaurants and with each restaurant we will introduce a different concept. But the fish burger will still be on the menu in some form or fashion,” she replies. “We’re always thinking forward and so i guess I can say we have a parking lot of ideas, and we do hope, probably within the next two years, to have our second establishment.”

But until then she says the demands of running a restaurant already take up plenty of their time, with their work day usually starting around 5am.

“It’s funny because I remember the Dunkin’ Donuts commercial where he gets up at some ungodly hour in the morning and says it’s time to make the donuts, cause that’s the way I feel about the fish burgers,” Kristal says with a laugh. On days they’re open they usually leave late after finishing cleaning and the next day’s prep. 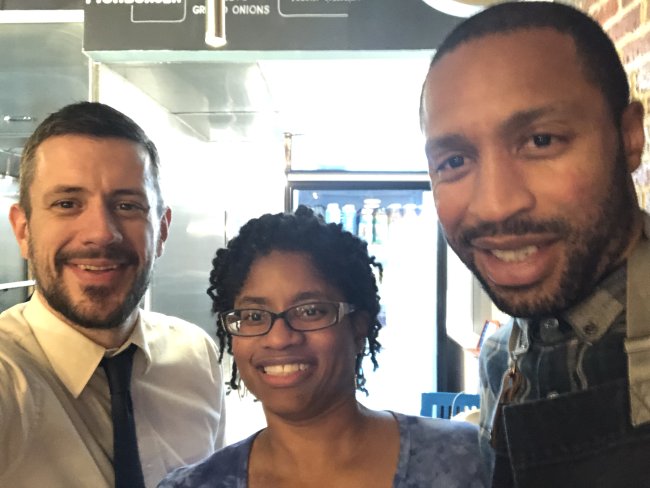 “Something that I think is unique to all entrepreneurs, especially new entrepreneurs for small businesses, the first two or three years you’re running off this sleep deprivation,” she tells me. Yet even though some days might be tiring, the Williams siblings are committed to their dream. “You’re also running off just the energy — I guess the energy that comes with the passion of loving what it is that you do,” says Kristal.