But Stephen is also an expert storyteller, and is putting that skill to good use in a film released today called The Primary Instinct. It’s a simple concept for a movie: Stephen, a stage, and his stories. It’s sure to be great.

Stephen first showed off his storytelling abilities in a film he released a few years ago called Stephen Tobolowsky’s Birthday Party. The non-fiction movie featured Stephen hosting his birthday party, sharing a host of fascinating anecdotes (mostly about his personal life, not his acting career). 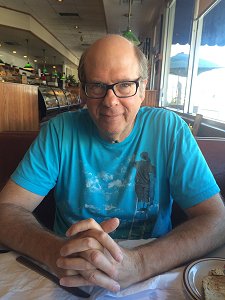 I had the honor of meeting Stephen in Los Angeles last October for breakfast at one of his favorite diners. During a two-part interview he told me about his love for acting and also his growing passion for writing. He told me that he enjoys telling true stories, and that’s what his latest movie is all about.

I’ve not yet watched The Primary Instinct, but plan on doing so very soon. Check out the movie’s official website for details on how to buy it. If it’s anything like Stephen Tobolowsky’s Birthday Party, it’s bound to be well worth your time.