Stephen Tobolowsky is a great actor, and an equally great storyteller.

He’s getting ready to promote his upcoming film The Primary Instinct, a Kickstarter-funded “concert” movie featuring him telling his unique brand of anecdotes. Nothing else. Just Stephen, a camera, and his stories. And I already know it’s going to be great.

Although he’s recognizable to many as a character actor (Ned Ryerson in Groundhog Day, among almost-countless other roles), Stephen also greatly enjoys telling stories either with his podcast or through the written word. 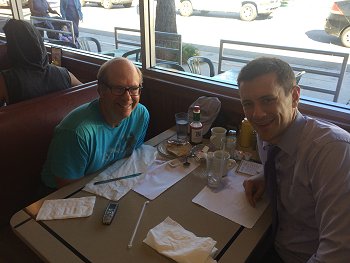 Today on a return visit to LA, I had a very pleasant lunch with Stephen and his friendly wife Ann. During our conversation I learned about The Primary Instinct and its upcoming premiere — this is definitely a movie that’ll be worth checking out.